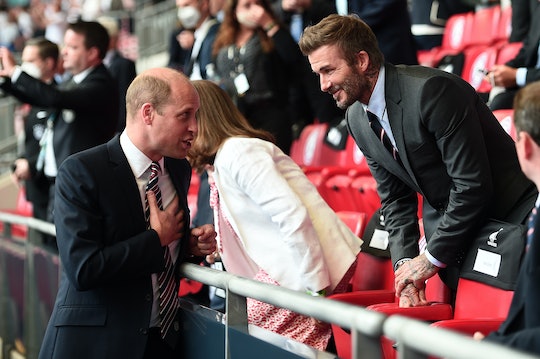 The proud fathers appeared on Instagram with their daughters to cheer on England’s victorious Women’s National Football Team.

England’s Women’s National Football Team made history this weekend, and Princess Charlotte, Prince William, and David Beckham and his daughter Harper were among the many English fans cheering them on. The Lionesses, as the team is known, won the European championship yesterday, the first time an English team (men’s or women’s) have taken home the trophy since 1966.

Prince William and Princess Charlotte released a rare video together on Instagram as the team entered their final match. “Good luck tonight @lionesses, we’re all cheering for you!” said Prince William, who shares Princess Charlotte, 7, Prince George, 9, and Prince Louis, 4, with Catherine, Duchess of Cambridge. The video is a close-up of him and Charlotte smiling at the camera.

“We both want to wish the Lionesses the best of luck tonight,” Prince William says. “You’ve done amazingly well in the competition and we’re rooting for you all the way.”

Princess Charlotte, who is a huge soccer fan herself and a “budding star” according to her dad, adds, “Good luck, I hope you win.” Then she says, “Bye!” and smiles and waves at the camera, showing off her adorable gap-toothed grin.

The Lionesses made it to the final of the UEFA European Women’s Championship, the main football competition (or, soccer, as Americans call it) held every four years between national women’s teams. The 2022 match was held at Wembley Stadium in England.

David Beckham posted his own video on Instagram Sunday, featuring his only daughter Harper, 11, showing off her skills on the field at Wembley Stadium. “Wait for her smile 😍,” the famous footballer captioned the video of Harper, whom he shares with wife Victoria Beckham. “Good luck @lionesses.. we can’t wait to watch you 🏆🦁.”

“Beckham steps up to take the last-minute free kick for the Lionesses,” Beckham narrates in the video. “She shoots, she scores!” he continues, as Harper, wearing bright yellow cleats, makes a goal.

“Let’s go Golden, bring that cup home!” Harper says to the camera. She is grinning from ear-to-ear after “scoring a goal” and spending one-on-one time with her dad, who also shares sons Brooklyn, 23, Romeo, 19, and Cruz, 17, with his fashion designer wife.

Other celebrities wished the team luck, too, including Ed Sheeran.

The Lionesses went on to win the trophy for England in a 2-1 win against Germany. A record breaking 87,192 attendees cheered the women to victory on Sunday, where England captain Leah Williamson called the title, the “proudest moment of my life.”

The official Lionesses Instagram posted photos of the women celebrating the victory last night, captioning one post, “WE ARE #WEURO2022 CHAMPIONS! 🏆” and another, “YOUR EUROPEAN CHAMPIONS! 😍🏆.” The Duke and Duchess of Cambridge’s official account commented, “An incredible win and the whole nation couldn’t be prouder of you all!”

Prince William also posted a photo of the victory last night, writing, “Sensational. An incredible win @lionesses and the whole nation couldn’t be prouder of you all. Wonderful to see history in the making tonight at Wembley, congratulations! W.”