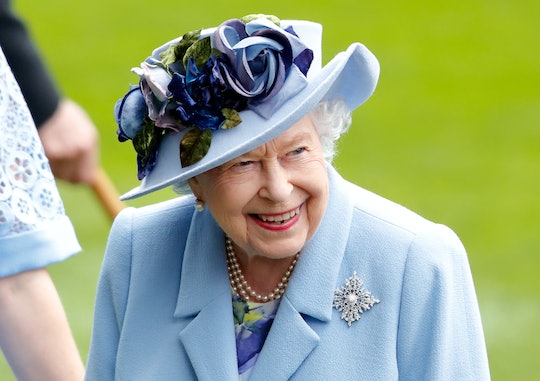 Britain’s longest-reigning monarch complimented the toddler on her choice of costume, calling it “splendid.”

It’s long been said that imitation is the sincerest form of flattery and it seems that Britain’s longest-reigning monarch is inclined to agree. Queen Elizabeth II reportedly sent a letter to a toddler who dressed up as her for Halloween, praising the 1-year-old Ohio girl for putting together a “splendid” outfit.

“The Queen wishes me to write and thank you for your letter, and for the photograph you thoughtfully enclosed,” Today reported the queen's lady-in-waiting, the Hon. Mary Morrison, wrote to the parents of 1-year-old Jalayne Sutherland. “Her Majesty thought it kind of you to write to her, and The Queen was pleased to see the photograph of your daughter, Jalayne, in her splendid outfit.”

Photos shared over Facebook by Jalayne’s parents showed the young girl celebrated Halloween in an outfit that could have been borrowed straight from the queen. For her costume, Jalayne wore a powder blue peacoat and matching hat similar to those worn by Queen Elizabeth II during the Royal Ascot at Ascot Racecourse in June 2019. To complete the costume, the toddler also wore white gloves, a strand of pearls, a large sparkly brooch, and a curly white wig. The addition of two corgis, a breed of dog much loved by the queen — who is reported to have owned at least 30 throughout her life — put Jalayne’s costume over the top.

In fact, Katelyn Sutherland, Jalayne’s mother, told Nottinghamshire Live she’d been inspired to dress Jalayne up as Queen Elizabeth II because of the close friendship the toddler has with the family’s two corgis. “The biggest inspiration for the outfit was the fact that our dogs are our daughter's best friends,” Sutherland told said. “We wanted to do something where they could all be included together. We are most definitely fans of the Royal family and truly admire how the queen walks by faith.”

According to Sutherland, Jalayne’s costume was a big hit with those who saw the toddler trick-or-treating. “While walking around on Halloween we received many, many compliments,” Sutherland told Nottinghamshire Live. “But my favorite reactions were when people bowed to her or did the royal wave and said, ‘Your Majesty!’”

Sutherland said she’d later sent a photo of her daughter in her costume to the queen on a whim and had not actually expected to receive a reply.

The family, however, is delighted to know the queen approved of Jalayne’s costume.

With her letter, the queen’s lady in waiting also sent Jalayne a bit of information regarding the Royal Pets, which include a number of Pembroke Welsh Corgi dogs.