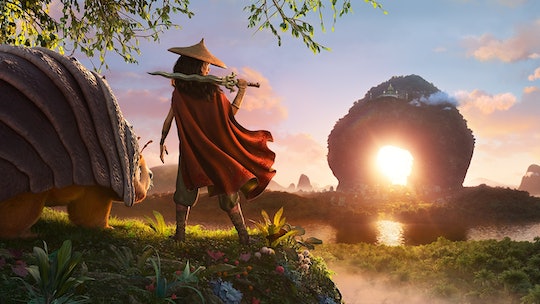 A new trailer for Disney's upcoming animated feature, Raya and the Last Dragon, has sparked controversy on social media about Southeast Asian representation in media. Specifically, about the dearth of Southeast Asian voice actors in the cast.

Raya and the Last Dragon is the story of a lone warrior, Raya, who must save her kingdom from dark forces by finding the last dragon, who will restore harmony to the land. That land is the fantasy world of Kumandra, which is based on Southeast Asian cultures. The film was written by Qui Nguyen and Adele Lim, who are Vietnamese-American and Malaysian Chinese respectively. Vietnamese-American actress Kelly Marie Tran stars in the titular role of Raya, making her the first Southeast Asian woman to star in a Disney feature, making good on her 2018 promise in a New York Times op-ed that she was "just getting started" in her career as a woman of color.

But while the rest of the cast is almost entirely of Asian descent, many have pointed out that much of the cast — including Awkwafina, Gemma Chan, Daniel Dae Kim, Sandra Oh, and Benedict Wong — are largely of East Asian descent.

"Imagine how big it would be [if] they actually casted Southeast Asian actors," Twitter user @jyndjarin wrote. "SE Asian actors are sorely lacking in Hollywood."

Others found premise itself problematic. "A friendly reminder that actual South-East Asians are not thrilled for Raya and the Last Dragon. They basically put the whole region in a blender and hired so little south-east Asian actors for the roles," @avamarga_ tweeted. "... Each country under South-East Asia is very unique. You cannot walk up to us and say a person from Thailand is the same as a person from Indonesia. We speak different languages and have different customs. This movie represents no one in particular." (Indonesia alone boasts 800 spoken languages according to Translators Without Borders.)

But others are enthusiastic to see Southeast Asian culture, however fictionalized, take center stage.

"OMG we're finally getting a Southeast Asian Disney Princess," tweeted @gigiesguerra (in all caps with lots of sobbing emojis.) "Come through representation!"

"As a Filipina-American, I am heavily emotional over this trailer for Raya and The Last Dragon," @sincerelyivy says. "I'm crying. I am so proud."

Raya and the Last Dragon will be simultaneously released theatrically and on Disney+ with Premiere Access on March 5.