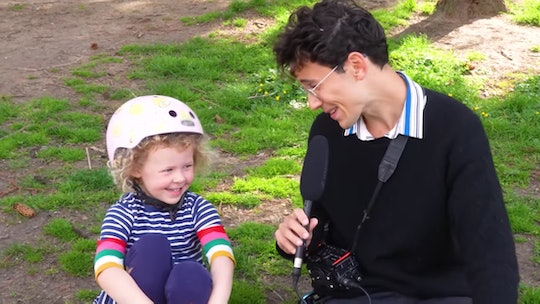 And, with three moms to fête, host Julian Shapiro-Barnum needs all the help he can get!

Famed director W.C. Fields once cautioned performers “never work with children or animals.” Frankly, any parent who’s tried to take just one nice picture of a child could attest to the difficulty of trying to wrangle small humans in front of any camera. And yet Julian Shapiro-Barnum, creator and host of the viral sensation Recess Therapy, makes it look easy. His viral interviews with children in New York City playgrounds are heartwarming, hilarious, and strike the perfect balance of chaos and charm. In his latest episode, he talked to children all about Mother’s Day.

Recess Therapy is a sort of synthesis of Shapiro-Barnum’s previous comedy experiences. He’d done on-the-street comedy as an undergraduate at Boston University, and his senior project involved interviewing kids at playgrounds asking what makes them happy. “The answers I got were much more complex than I was expecting,” he tells Romper. He found those interactions “electric” — kids were insightful and funny, even when they didn’t mean to be — and he realized there was something there.

In 2021, he pitched the show to Doing Things Media. “A little over a year later it's really taken off,” he smiles. “It's really found a community.” A large community; on Instagram, Recess Therapy boasts 1.8 million followers.

In his latest episode, the 22-year-old comedian partnered with Grubhub — which is offering diners who purchase a $50 gift card or more a $15 bonus gift card from now until May 8 — to ask kids about their mothers and mother figures, how they’d be celebrating them this Mother’s Day, and what foods would be involved.

The observations and advice range from the very sweet (one girl shared, “I’m going to give her a picnic, I’m going to pamper her, and I’m going to act like her mommy.”) to the absurd. (That same girl says she’s going to cook her worms because “it’s the worst thing I can think of.”)

But even when it’s ridiculous, it’s chock full of the kind of laughably heartwarming wisdom that parents of young children are all too familiar with and what makes Recess Therapy so relatable and charming. Like the little boy who tells Shapiro-Barnum that his mom taught him to “know my feelings matter,” but who randomly punctuates sentences with quacks because “I’m the duck, silly.” You know: classic kid stuff.

Normally, finding subjects kids are excited to talk about (the secret sauce of the series) is a matter of flexibility. “The prep work is trying to predict what kids want to talk about, usually being wrong and then being good at pivoting and finding something,” he smiles ruefully. But this episode was different.

“Kids have so much to say about their parents, so much to about their moms,” he observed. “I had a lot of really funny and sweet moments where I would ask the moms to step away a little bit and then the kids would be so much nicer; the second their moms went away, they were much more sweet and open. I saw that over and over again.”

As for his own Mother’s Day plans, historically it’s been a big deal in his family. Raised by five gay parents — three moms and two dads — the holiday has tended to be “chaotic but sweet.”

Shapiro-Barnum quarnatined with his fathers in Brooklyn when the covid pandemic began.

“We would always go to the park and do cupcakes and grandmas would come and it was always a very fun like kind of field day vibe,” he recalls. “But it would always be very stressful for me to have to write three sincere cards. Seriously! It's hard!”

After he writes those cards, Shapiro-Barnum is tossing around the idea of writing a book in a few months about the things he’s learned talking to children, though he’s quick to point out that despite those experiences, he’s far from an expert. “A lot of people ask me questions about how to talk to kids better. And I thought that was funny because my relationship with kids is kind of unlike anyone else: no one else is meeting hundreds of kids and having very short conversations with them,” he laughs.

Still, he’s not entirely without insight: “The thing that I hold true in any social situation, but especially with kids, is finding common ground and making them feel comfortable as fast as possible. I think a lot of kids meet adults and feel like the adults don't see eye-to-eye with them or look down on them or something... What I try to do is meet them and establish an understanding that at least we can laugh together.”