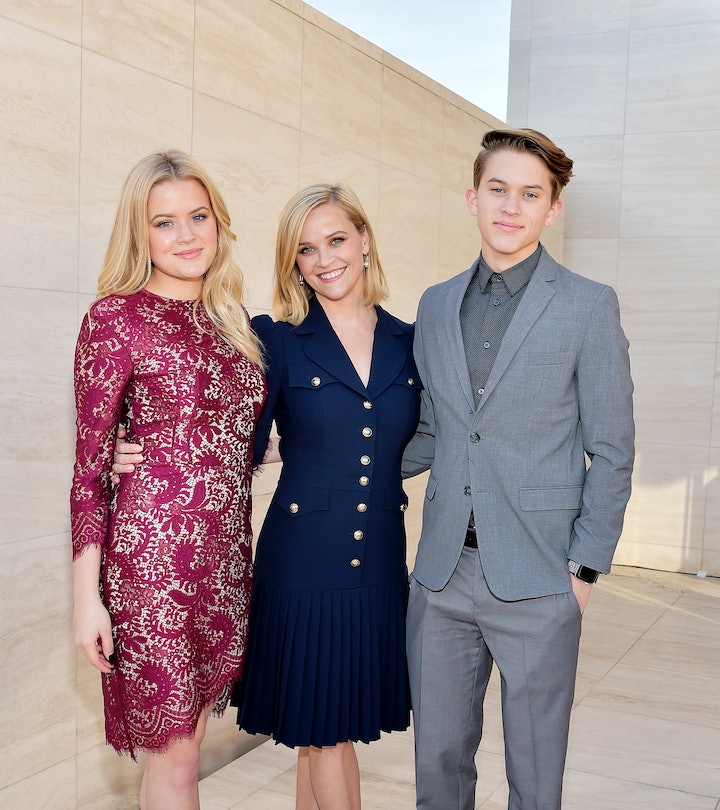 Catch a glimpse of Deacon in Season 3 of Never Have I Ever premiering Friday!

Deacon Reese Phillippe didn’t just get a name from his famous mama — he also got her acting skills! Reese Witherspoon’s 18-year-old son is following in his mom’s footsteps and making his acting debut this week. The recent college graduate, whom Witherspoon shares with ex-husband Ryan Phillippe, will guest star in Season 3 of Mindy Kaling’s Never Have I Ever, which premieres on Netflix on Friday, Aug. 12.

Netflix announced on July 27 that Phillippe will guest star as a character named Parker in the series, a member of a rival debate team from a private school who is always up for a good party. The streaming platform also shared a photo, via press release, of Phillippe in his role. In the picture, Phillippe is wearing a pink-and-purple tie-dye hoodie, and he’s sitting down with a red Solo cup in front of him. The close-up shot doesn’t give much more about his character away and neither does the trailer, which the streaming platform released on July 27.

Never Have I Ever is a series created by The Office star Mindy Kaling, which stars Maitreyi Ramakrishnan as Devi Vishwakumar, an Indian American teenager who is navigating high school life. Season 3 picks up as she and Paxton Hall-Yoshida (Darren Barnet) have made their relationship official, which makes their classmates jealous.

Phillippe’s acting debut on Kaling’s show is especially fun, as she is good friends with his mom. The Legally Blonde star and Kaling starred in A Wrinkle in Time in 2018, and Kaling also appeared on The Morning Show with Witherspoon and co-star Jennifer Aniston.

“We talk all the time,” Witherspoon told Entertainment Weekly about Kaling in November 2019. “My producing partner had worked on The Mindy Project and we’re both really close with Mindy, and I did A Wrinkle in Time with Mindy, and then the part was just perfect for her. We were like, ‘Would you really do this?’ And she was like, ‘Yeah, that sounds like so much fun!’ So she came and played and gave us some of the greatest one-liners.”

Kaling has also signed on to write Legally Blonde 3 with Dan Goor, per Deadline, in which Witherspoon will reprise her iconic role as Elle Woods.

In a January 2021 interview with Access, Kaling, who is mom to Katherine “Kit,” 4, and Spencer, 1, revealed she has turned to Witherspoon for parenting advice.

“What’s so cool about Reese’s journey is that she was a mom when she was at the beginning of the height of her career, 22 to 24, and it didn’t slow her down at all,” Kaling said. “She was able to raise two kids and be a young mom. Then she experienced it again in her 30s with her third. So she’s really seen it at every stage and her kids are so close to her. So I really look to her for a lot of parenting advice.”

She also revealed her daughter, Kit, goes to the same school as Witherspoon’s son, Tennessee James, 9, whom she shares with husband Jim Toth. Witherspoon is also mom to Ava Elizabeth, 22, with Ryan, who is also an actor.

On Aug. 3, Ryan told Entertainment Tonight how happy he is for his son. “I am so proud. He's about to go to college for music. That’s his primary focus. The acting thing he likes to do, and he will do according to what his appetite for it is, but his focus is primarily music,” the I Know What You Did Last Summer star said. “The music, he's actually dropping a mixtape this Friday on SoundCloud. It’s incredible. I’m so excited for people to hear. It's really good stuff. I’m super proud.”

Stream Never Have I Ever on Netflix.

More Like This
10 Parenting Lessons From Abbott Elementary That You'll Want To Write Down
'Workin’ Moms' Season 7 Is Reportedly In The Works! Here’s Everything We Know
Kim Kardashian Stars In Hilarious House Of The Dragon Parody, The Targashians
Lifelong Teacher Dr. Jill Biden Loves Watching Abbott Elementary Too