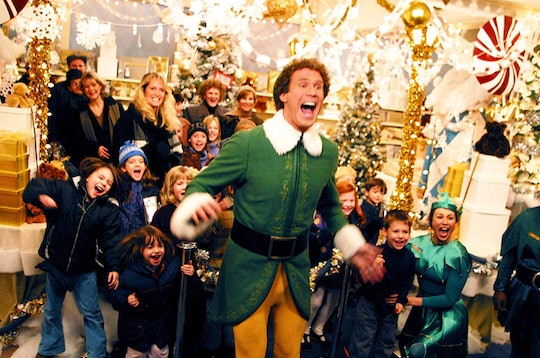 Things were not helped by me frequently saying to my kid, “Look, isn’t that so funny?!” and then beseeching him with my eyes to laugh at the parts I thought were hilarious.

I just want to get this out of the way right off the top: I’m a former Christmas movie hater. Truly could not stand the stuff, made me sick. This can probably be chalked up to growing up in a Muslim household but I don’t want to downplay the key role that my innate cynicism played either. Up until my 30s, only two holiday movies ever broke through my Grinchy heart. The first was Fred Claus starring Vince Vaughn, which I once watched, two sedatives deep, on an airplane and cried so hard that an old lady eventually walked over to me and whispered, “It’s only a movie.” The second was Elf.

Elf, the delightful little North Pole meets New York film starring Will Ferrell and James Caan, came out in 2003, but I saw it five years later. But it had a big impact, maybe because I was hungover the first time I watched it, or maybe because I was finally open to the Christmas movie experience. Either way, it was the tipping point on what has now become a bit of a Hallmark-tinged compulsion.

If you’re not familiar with Elf (gasp!), it’s about a baby orphan named Buddy who accidentally crawls into Santa’s sack one night, ends up in the North Pole, and is raised by elves until he finally discovers he’s actually a human. Buddy eventually goes to New York City to seek out his biological dad, played to surly perfection by James Caan, and finds love and family on the way to saving Christmas. You can see why it was one of the first holiday-themed movies I ever really got into.

My eldest kid is still pretty young and developing the attention span for movies but we did recently watch Home Alone together and the experience was so affirming, watching him guffaw at all the right parts somehow validating my entire childhood, so I was genuinely excited to show him Elf.

I wish I could tell you things turned around after that, that somehow the spirit of Christmas overtook my wee lad and he curled up beside me to chuckle and sigh at Buddy’s tender bildungsroman, but that’s not how things turned out.

It must be his age but my son is newly obsessed with death and orphans and asks about both constantly when we watch something together. So five minutes into this cherished classic, I was answering a lot of questions about why baby Buddy has no family, what an orphanage is, what adoption means, and why his mom is dead. I think I handled myself pretty well, to be perfectly honest. Not a tear was shed, although it was enough to make me question why Buddy’s mom didn’t just tell James Caan about the situation earlier.

The entire sequence of events in the North Pole leading to Buddy the Elf’s discovery that he is in fact an adopted human is so funny and sweet but was not helped by me frequently saying to my kid, “Look, isn’t that so funny?!” and then beseeching him with my eyes to laugh at the parts I thought were hilarious. And then when I did laugh, he kept asking me why I was laughing and if you ever want to kill a joke quickly, try explaining it to a 4-year-old. I could see his attention span flailing and not even my time-tested trick of screaming to everyone in the room that Elf was filmed in my hometown of Vancouver was successful in pulling all eyes back to the movie, although that fact did garner an eye-roll from my husband who’s heard it once or twice.

I wish I could tell you things turned around after that, that somehow the spirit of Christmas overtook my wee lad and he curled up beside me to chuckle and sigh at Buddy’s tender bildungsroman, but that’s not how things turned out. Somewhere around Zooey Deschanel’s shower duet with Will Ferrell of “Baby It’s Cold Outside,” my son started throwing all the cushions off the couch and screaming, “Look at me, Mommy, it’s a new move!” and I started checking my Twitter for Omicron updates.

Eventually he gave up the charade entirely and went into the basement to play with his sister and my husband and I finished Elf together with two heavily spiked eggnogs and the leftover remnants of my bribery popcorn. By the time the film reached its just-the-right-side-of-saccharine conclusion, with Buddy redeemed as a real elf, Santa back on his merry way, and Buddy and Jovie making babies of their own, I even managed a few tiny tears of emotion, helped along by the rum.

My son came back in time to see Buddy return to the North Pole and asked to watch The Grinch instead. My husband started to admonish him, but I countered, wearily, that it was only a movie.