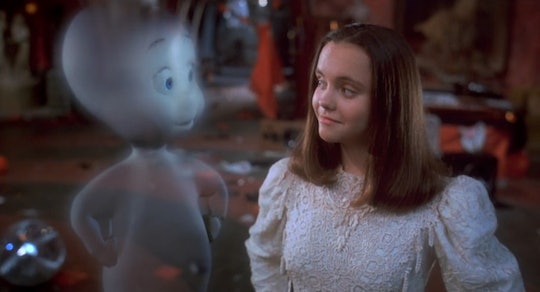 Over the years, many a Halloween-season family classic has entered my annual “must watch” list: Hocus Pocus, Nightmare Before Christmas, It’s The Great Pumpkin Charlie Brown. But the 1995 movie version of Casper? I can’t remember ever watching it more than one time. As I looked back, I remembered vaguely liking it and Devon Sawa whispering “Can I keep you?” but other than that? Basically nothing. Curious, I re-watched Casper, as a mom, to see if it should join the line-up. Here’s what stood out.

The level of family dysfunction in this movie is stunning

Where do I even begin? Let’s start with the least egregious: Carrigan all but being left out of her father’s will. Like, yes, he left it to good causes and yes, Carrigan is not a nice person, and yes, he still left her an incredible mansion, but there’s clearly something going on there. Then there’s Casper and his “uncles” who... are we ever really clear on how they’re his uncles? Were they his uncles when he was alive? Do they just happen to haunt the same house? In either case, they’re three adult spirits who have bullied a child (possibly related to them) into being their unpaid servant and treat him with hostility and verbal abuse.

Then we get to Dr. James Harvey and his daughter Kat, who have traveled to at least nine different towns in 2 years so the doctor, who left a traditional, stable, psychiatric practice, to become a ghost therapist, which is just a ruse, really, to allow him to try to communicate with his dead wife, Kat’s mother. In that time, Kat has literally begged for stability, and it’s clear that she’s been the one taking care of practical matters, like home repairs, and catering to her dad’s feelings.

How is Carrigan not a camp icon?

She has all the makings of this kind of icon — careless disregard for anyone but herself, distinctive voice, killer fashion sense, rapier wit — and I’m genuinely surprised she isn’t a Halloween costume for former theater nerds and drag queens everywhere. Her perfect blend of drama, style, and scorched earth tactics are truly entertaining. Angrily scolding her boyfriend/manservant for not allowing her to murder him? Classic.

(Also, I have to add: I’m shocked Carrigan hasn’t taken off as a baby name, because it’s great.)

Seriously, I couldn’t stop coming back to what an absolutely realistic grift this is. Tell me you can’t imagine certain celebrity-run wellness magazines turning this dude into a feature story and media personality. You can’t do it. Because this would absolutely be a thing people would pay to have done in-between vaginal steams and butthole sunbathing.

I still want to live in Whipstaff Manor

The ‘90s was really, really good at a certain kind of family-friendly goth vibe. One that’s vaguely child-like but also good and spooky. Nightmare Before Christmas, The Addams Family, the list goes on. The house-vibe in Casper absolutely belongs in this fine tradition.

This is really dark and deep for a kid’s movie

So I completely forgot that a lot of the last quarter or so of the movie revolves around murder. Like, the Ghostly Trio trying to murder James so he can stay their friend forever. Or Carrigan and Dibbs trying to murder each other so one of them can turn into a ghost and fly through a wall to find hidden treasure. It’s a lot. But the darkest part? Casper himself.

Like, in the back of your mind you know Casper, as a ghostly child, is a child who died, but while the cartoon always sort of leaves that unsaid the movie really leans into it. In one scene the friendly ghost even has a monologue recalling the evens that led to his death and describes what it feels like to die — “Like being born, but in reverse.” Which brings us to the next point... it gets way deeper than I remembered or expected.

And it’s not just Casper’s plot line — the whole “searching for the dead mom’s ghost” plot culminated into something surprisingly touching, when the ghost of Amelia explains that because she was loved so well in life that it left her with no unfinished business and she was able to be somewhere she could “watch over [James and Kat] until they could be together again.”

And speaking of Amelia...

Amelia Harvey came back from the dead to gently scold her husband & as a non-ghost mom, I support that

I kind of love that James has been searching for the ghost of his wife for years and when she finally appears before him it’s to say “You really need to stop it,” but, like, in a really sweet way! She even gives good parenting advice.

Amelia: What parent does?

Which is really nice advice for any caregiver, but of course, since James definitely seems to know way less about parenting than he should, she then goes over to critique other decisions he’s made (“French fries are not a breakfast food.” “Don’t ask [Kat] to wear a t-shirt under her bathing suit.”) and well she should.

Casper is a Nice Guy™

Sorry/Not Sorry, folks, but it’s true. Even the Sawa-ist of Devons cannot undo the fact that Casper is That Guy, and we must caution our sons not to follow his example.

Think about it! For one thing, he uses his powers to manipulate a way to get his crush (whom he’s seen once on TV) into his house (when he knows she hates moving around). He is then beyond socially aggressive in trying to make her like him. To be honest, this is forgivable: he’s a goofy little kid. HOWEVER, it’s when we see him routinely steamroll Kat’s “No”s (like very reasonably asking him not to dangle her out a window) and get all salty when she starts to pay attention to another (living) boy that it becomes clear. “Oh. Casper is a bit of a jerk, huh?”

Casper’s un-wokeness aside (because, it’s a ‘90s movie: expectations can rarely be high), this movie was honestly way better than I remembered, and I’m looking forward to watching it with my kids.