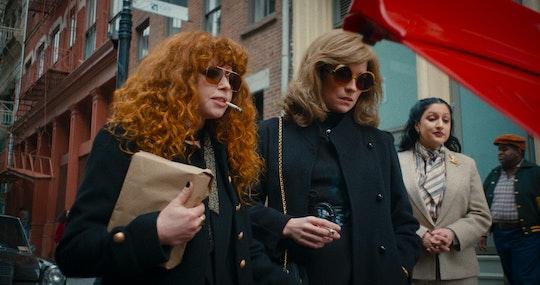 Back when I was a glowering, moody teenager who was perpetually annoyed by her parents, my mother used to joke in exasperation, "You have to like the mother you get." It was this phrase that kept bouncing around my head as I watched Season 2 of Russian Doll — because ultimately, the second season of the Netflix show is about mothers, daughters and the knotty bonds between them.

In Russian Doll, writer-actor Natasha Lyonne plays Nadia Vulvokov, a ballsy New Yorker who croaks out things like "cock-a-roach" while swagging through the city, her collar popped and a cigarette dangling from her mouth. In Season 1, Nadia found herself trapped in a Groundhog Day type of time loop, returning again and again to her frenzied 36th birthday party every time she died.

In Season 2, we catch up with Nadia for more trippy time adventures. On the cusp of her 40th birthday, she boards the downtown 6 train only to find herself whisked back in time to 1982. She soon realizes that not only has she traveled back in time, she has also, somehow, traveled into her mother's pregnant body — as her mother, not her fetus.

Nadia embarks on a time-hopping mission to fix mistakes in her family's past. In a nutshell, she attempts to restore the family's missing fortune that was first lost during the Second World War when the Nazis took her grandmother's possessions in Budapest and then lost again when her mother lost what was left of the fortune, now in the form of gold Krugerrand coins. We take the 6 with Nadia to '80s New York and then to '40s Budapest as she attempts to rewrite the past and thus resolve her family's generations of trauma.

"Trauma is a topographical map written on the child and it takes a lifetime to read," Ruth, Nadia's surrogate mother, says at one point in Season 2.

Lyonne's take on the time travel trope is the perfect way into the idea she explores throughout: that trauma from the mother is etched into the child — and that for each generation, it can be a lifelong journey to come to terms with it and really understand it. We see Nadia inhabiting her mother's body and living through her own traumatic experiences in real time, making the metaphor literal, before she goes back further and does the same with her grandmother.

Eventually, Nadia kidnaps herself as a baby, bringing herself back to the present day, proclaiming that she will be her own mother. "I'm just going to go ahead and beat time at its own game," she says. "We're finally going to get the mother we should have had — me." Of course, time doesn't much like this plan and things begin to get a little weird. Time starts to collapse and fracture with baby-Nadia in the wrong timeline. What Nadia ultimately realizes is that she can't be her own mother just as she can't fix the past trauma in her family. And nor would she want to. She finally accepts the mother she got. She brings herself back to the '80s, saying, "I didn't choose you the first time, but I guess that's just how the story goes, huh, Mom?"

Trauma is a topographical map written on the child and it takes a lifetime to read — do we only truly understand and accept our parents after a lifetime of tracing our way back through their “map”? In our quest to understand who we are, Russian Doll suggests, we are always going back — in Nadia's case, quite literally — to follow the traces our parents have left behind for us. Only then can we come to accept our parents despite their mistakes. Of course, sometimes, this realization comes too late.

Nadia, it seems, always felt motherless, adrift in the world. Her mother was not always a good mother. She struggled with mental illness. She was unstable, unreliable, unpredictable.

Although Nadia accepts her mother and her mother’s flawed past by the end of the series, she also comes to another powerful realization. The mother she had so desperately wanted had been there all along in the form of her surrogate mother, Ruth.

Throughout both seasons, Ruth, Nadia's adopted mother and her birth mother's best friend, is a steady, loving figure who, unlike Nadia’s real mother, is actually present.

When Nadia goes back to 1982 (and steps into her mother’s shoes), she meets Ruth as a young woman. Played by Annie Murphy, the young Ruth seems to be fraying at the seams. She is newly widowed, while her best friend, Nadia’s mother, is pregnant and, it seems, going off the rails herself. This isn’t the strong, impenetrable Ruth of 2022 that Nadia knew. This is a younger, more vulnerable Ruth.

After Nadia’s mission to resolve her family’s trauma fails, she finally restores time to its natural balance. But when she gets back to her own timeline, a month has passed. She has missed Ruth’s death and her funeral.

“I need you to be here with me right now,” the young Ruth says at one point. “I’m here, I’m with you,” Nadia replies in confusion. Only after journeying back through her “map” does she realize what Ruth really meant.

The show uses a very unique time travel concept to ultimately give us a very simple, heartbreaking message about how generational trauma can blind us from what’s right in front of us — even though our families may be flawed and unconventional, time moves on and we have to appreciate the families we have while we can.

While I have never hopped aboard a 6 train heading to the 1980s, as I grow older, I can’t help but feel a small jolt of recognition with each new milestone I reach — a realization that my mother had her own milestones and her own journey. And that journey is irreversibly linked with my own. In many ways, Russian Doll gives us the perfect metaphor for a very real dance that occurs between mothers and daughters as they grow older and start looking backwards for answers about the present.

While you may not always have to like the mother you get, Russian Doll reminds us that ultimately, there’s no option but to accept them — even if that acceptance takes a whole lifetime to reach.