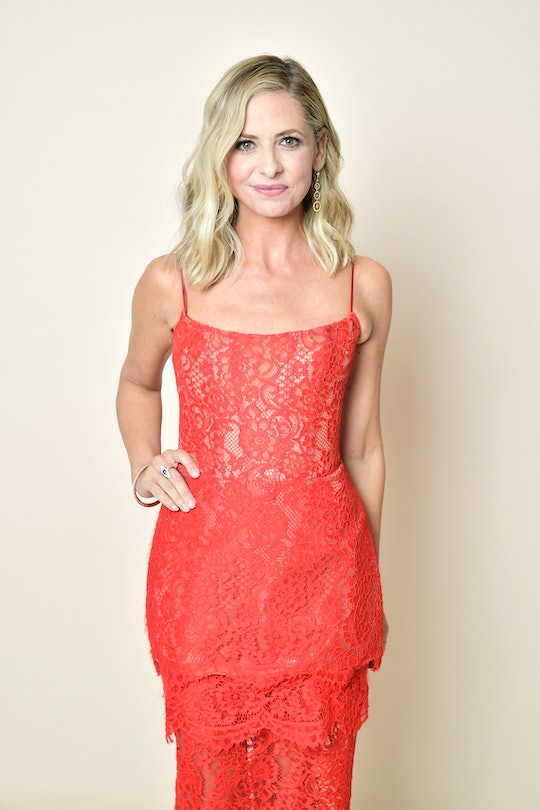 The Buffy actress talks remote school, cutting herself some slack, and “feeding her soul” by helping to feed others.

When I speak to actress Sarah Michelle Gellar from her home in Los Angeles, we both agree that we won’t tell our kids when our phone call has ended. Pandemic parenting means a work call is a "good break," and, if you keep quiet, you can stretch it out just a little bit longer as an act of self-preservation: when else will there be an opportunity to revel in entire, glorious minutes of solitude and silence?

No matter who you are, nothing is easy about parenting right now. Still, Gellar tries to keep her own challenges in perspective. “This has been the hardest year that I've ever faced and still I'm doing better than most,” she says. And she’s quick to point out that there have been some silver linings. “I mean, there's never been a time in our lives where we've had 365 dinner meals together, all of us. That's been incredible.”

The mom of two is determined to help other families put dinner on the table — leveraging her celebrity and social media presence (3.5 million followers on Instagram alone), she’s partnered with Subaru to help them donate 100 million meals to Feeding America. “As a parent, the thought of not being able to put food on the table...” she trails off. “It is the most basic human right, to be able to feed your body, feed your brain.”

The pandemic has more than doubled food insecurity in the United States, particularly in households with children, affecting upwards of 23% of American homes, according to a report from Northwestern University’s Institute for Policy Research. Gellar says she was excited at the opportunity to support Feeding America because of their reach and their ability to make the most of donated money, with one dollar providing up to 10 meals. “So often we always say, ‘Well, what can we do? I'm one person,’” she says. But, she points out, “if everybody donated a dollar, think of the difference that we could make in so many lives.”

Giving back has the added benefit, Gellar says, of “feeding her soul,” something she’s made a priority in the past year. Getting outside and in the sunshine has been a must. And she and her friends have taken Zoom to a new level with regular chats that include elaborate games involving shared Google docs and DIY cocktail mixes. She’s grateful for the connections she’s strengthened during this time. “It's not just, ‘Hey, what's up,’” she says. “It's, "OK. How are you? How are you really doing?’”

She’s known for playing strong women, but Gellar doesn't mind admitting when she’s struggling in real life, and the pandemic has been... a struggle. Remote school, multiple work projects on hold, two puppies who, after two months, have just finally started sleeping through the night, missing friends, missing New York (she’s never been away from her hometown this long). As for the things she’s still able to do, there’s a certain compartmentalization she misses. “I always like to be 100% committed to whatever I'm doing,” she says. “When I'm at work, my focus is 100% work. When I'm home with my kids, I'm 100% here with my kids. That's just not an option right now.”

Still, Gellar is grateful for the “bonus year” she feels she has with her children, Charlotte 11, and Rocky, 8. “Normally [they would] be out at sleepovers and birthday parties and performances and classes. Now it’s us.”

She’s also given herself more grace when it comes to the kids’ remote learning. Though it hasn’t gotten any easier since the first months of lockdown, she’s learned to go easier on herself. “I don't have a master's in education. I don't have my doctorate,” she says. “I'm focusing a lot more on the social-emotional learning aspect of it than the fact that they've changed math.” You can practically hear the sly smirk in her voice. “There's nothing we can do. They changed math.”

To make your own donation to Feeding America, please visit: http://FeedingAmerica.org/SubaruSMG