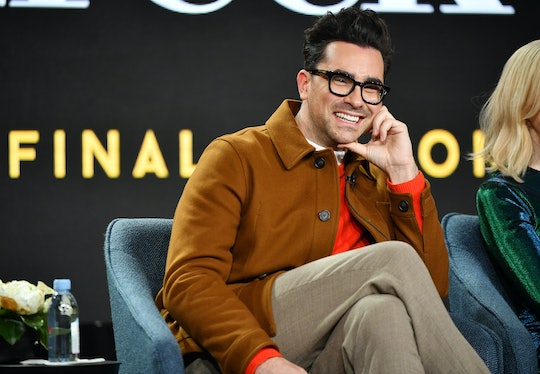 “Thank you for the correction,” I said. Pansexual was not a term I grew up with in the '70s and '80s; sometimes I have to be reminded.

But my 8- and 11-year-old kids don’t, and not just because they are steeped in LGBTQ terminology, and close to LGBTQ members of our own family, but because, as a family, we watch Schitt’s Creek. (This post contains spoilers.)

If you haven’t watched it yet, the Canadian sitcom Schitt’s Creek chronicles the trials and tribulations of an uber-wealthy family that loses everything except their fabulous clothes and a rural town they’d once purchased as a joke. Penniless, but draped in lamé, they arrive in the middle of nowhere to start from scratch, despite their utter lack of any kind of practical skills — including how to love one another, or themselves.

I started watching the show, alone, last spring, streaming it as a palate cleanser after stressful, isolated pandemic days, working full time while the kids did online school.

Like a lot of people, it took me a little while to fall in love with it, but once I did, I fell hard. (I’m not the only one. The show took home nine Emmys in 2020 and is up for five Golden Globes, including best TV musical or comedy series.) I wasn’t all that interested in the recurring narrative of elite city folk realizing that the hicks they looked down upon contained infinite wisdom. But I was deeply drawn to the characters, especially the flawed adult children realizing that they had the capacity to change. Unlike almost any comedic/romantic narrative I’ve followed on the small screen, the show is in part about people who think they’re incapable of loving, or being loved, and finding out they’re wrong.

A few months ago, I decided to let my 8- and 11-year-old kids watch it. The pandemic had led us to loosen all kinds of restrictions, from those on sugar cereal to media, and if they were going to have TV time, I decided it should be something I wanted to watch, too. (And while we adults have also loosened our restrictions on swearing in front of our kids during these stressful days, the same rules apply in our house as they do on network TV: The kids can say Schitt if it’s paired with Creek.) I had no real agenda other than making sure every member of the family was equally entertained.

But quickly I realized that while there was plenty of bad behavior — inspiring conversations about how the characters could and should have behaved differently — the show also exposed my kids to important ideas, not to mention fashion trends.

During one particular episode, David Rose, the show’s protagonist, played by creator Dan Levy, was sharing a kiss with a handsome, lanky fellow, while dressed in his common outfit of a black dress over black jeans. In earlier shows, he’d been kissing his friend Stevie, a woman who favored long hair, loose plaid shirts, and jeans. That’s when my kids informed me that David was pansexual, a sexual orientation we’d discussed but they’d never seen represented. It’s now completely normalized for them.

For our family, having a wide range of normal when it comes to sexuality and gender is essential. One of my daughters is very traditionally feminine. The other hasn’t worn a dress since she was 3, and while she identifies as a girl, a rainbow kid, and a tomboy — a subject I’ve explored extensively — she’s often labeled by others as gender nonconforming (a term she doesn’t care for herself, but technically applies). That is, she has lived her life going against the grain of traditional girldom, and Schitt’s Creek has given her a representation of a happy life lived that way: against the grain.

Soon I started thinking about the other messages the show was teaching my kids. David’s parents on the show, Moira and Johnny (played by Levy’s real-life father Eugene) are deeply in love, well into their 70s. David wears whatever the hell he wants. Stevie doesn’t care about her appearance. Men — and women — may wear dresses. Women — and men — may wear flannel shirts and jeans. Friendship is everything. Money doesn’t buy happiness. Anyone may love a man, or a woman, or a person who identifies as neither. Love can last through good times and bad, and well into old age.

The more we watched, the more excited I got, not just because family TV could be entertaining for all of us, but because maybe the show could act as a kind of sex ed for them, or health class. I wasn’t sure if they were as enthused about this revolutionary idea as I was, so I decided to ask them straight out what they’d learned.

“Well, but what did David teach you?” I asked.

“That fashion is everything,” my younger daughter said. Then she added, twirling the collar of her track jacket, which she wore over a lacy shirt: “But I already knew that.”

“What about that you can have relationships with men or women?” I asked. “That men can wear dresses?”

“We already knew that, too,” the older one said. “You tell us that all the time.”

And it’s true. I’ve been telling them since they were little that we don’t care about the genitals or the gender identity of the people they fall in love with, that their sex doesn’t and shouldn’t determine what they’ll wear, what they’ll like to do, or whom they’ll love. Their bodies don’t define who they’ll become. I just didn’t know that they’d heard me.

I won’t give away too much, but by the show’s end, Schitt’s Creek chronicles what is, to me, the most beautiful love story ever told on TV, a gay romance recently celebrated on a two-story-high billboard — something unthinkable when I was a kid, when the term pansexual wasn’t woven into the lexicon and when so many fewer gay people were out and accepted. When Dan Levy tweeted the image, he wrote that it was a “campaign that my teenage self would never have dreamed to be true.”

“Maybe the kids are finally just seeing in the media what we’ve been talking about at home,” my husband suggested.

So another thing Schitt’s Creek did for me was make me feel like I’m doing an OK job at parenting, at least in this particular way, when it comes to gender and sexuality.

My daughter will be able to dream what Dan Levy couldn’t. Through his creation, and through our discussions at home, she’s seen a world in which LGBTQ people are loving and loved, and can create happy, full lives no matter their circumstances, no matter how far they travel against the grain.

For that, I’m grateful to Dan Levy, too.

Schitt's Creek is available to stream on Netflix.