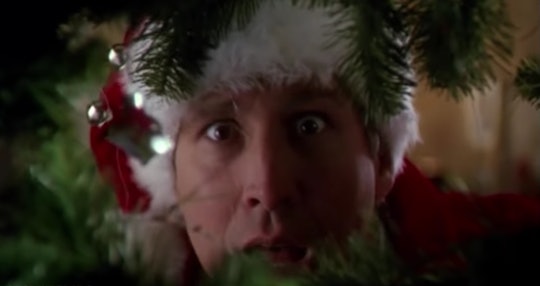 You Can See Clark Griswold, Cousin Eddie & More On The Big Screen This December

Released in December of 1989, National Lampoon's Christmas Vacation, is the third installment of the National Lampoon's Vacation films. It's expected to return to select AMC Theatres on Dec. 5 for a 30th anniversary showing. According to the movie theater chain, showings are planned at dozens of theaters spread across more than 40 states. What's more, fans who opt to see the film at any of the participating Dec. 5 fan events will also receive an exclusive ornament for their tree.

After two hectic family vacations full of accidents and misadventures, National Lampoon's Christmas Vacation sees the Griswold family settling in for a cozy Christmas at home. In the film, Chevy Chase and Beverly D'Angelo reprise their roles as Clark and Ellen Griswold while Johnny Galecki and Juliette Lewis star as their son Rusty and daughter Audrey. Not to be forgotten is Randy Quaid who stars as Griswold's Cousin Eddie.

Of course, no matter how well-intentioned Clark Griswold's plans for giving his family a "fun old-fashioned family Christmas" may be, it wouldn't be a National Lampoon film if things didn't go awry. From a disastrous quest to cut down the perfect Christmas tree to finicky holiday decorations, unannounced houseguests, and a disappointing bonus at work (not to mention one epic holiday meltdown), the Griswolds struggle to have the holiday they'd envisioned.

Since its release 30 years ago, the PG-13 rated film has become something of a holiday classic. And while there's nothing cozier than tucking the whole family in under a blanket to watch movies at home, there's something extra special about getting to see a classic Christmas comedy on the big screen. You can see if National Lampoon's Christmas Vacation will be playing at an AMC Theatre near you via the movie chain's official website.