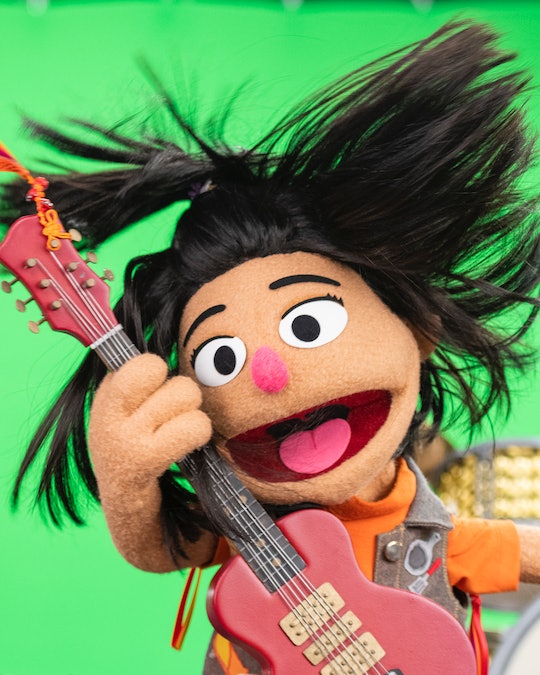 Ji-Young will make her debut in a Sesame Street special set to air on Thanksgiving Day.

A new neighbor is moving on to Sesame Street! The beloved children's television series has announced plans to introduce Ji-Young a new Korean American muppet character performed by puppeteer Kathleen Kim. Ji-Young will make her debut in See Us Coming Together, an upcoming Sesame Street special centered around celebrating the rich diversity of Asian and Pacific Islander communities.

Seven-year-old Ji-Young will be the first Asian American muppet in Sesame Street’s history, making her debut extra special. And according to the Associated Press, she was practically destined to join Big Bird, Elmo, Grover, and Rosita on what is quite possibly the most famous street in children’s television. “In Korean traditionally the two syllables [of a name] they each mean something different,” Ji-Young told the AP, adding that Ji meant wise while Young meant courageous and strong. “But we were looking it up and guess what? Ji also means sesame.”

Sesame Workshop, the nonprofit media and educational organization behind Sesame Street, described Ji-Young as a passionate girl who loves to rock out on her electric guitar and skateboard in a recent press release. Performed by Kim, a Korean American puppeteer with puppeteering credits on A Beautiful Day in the Neighborhood, Once Upon a Sesame Street Christmas, and Helpsters, Ji-Young will help bolster Sesame Street’s mission of empowering children and families of all races, ethnicities, and cultures to value their unique identities.

“It’s a powerful thing when kids see people like themselves represented on screen and in stories,” longtime Sesame Street cast member and co-director of the See Us Coming Together special Alan Muraoka said. “It supports them as they figure out who they are and who they want to be. We can’t wait for families to get to know Ji-Young in this special and in future seasons of Sesame Street — and celebrate some of the Asian and Pacific Islander people in our neighborhood!”

See Us Coming Together: A Sesame Street Special will also see the Sesame Street gang talk about anti-Asian hate and racism. In the special, Ji-young will seek out trusted adults and friends after being told in an offscreen incident “to go back home” despite having been born in the United States. The offscreen incident is reminiscent of how many Asian and Pacific Islander people are perceived or stereotyped as “perpetual foreigners” in western countries.

Shang-Chi and the Legend of the Ten Rings star Simu Liu will join other celebrity guests including actress Anna Cathcart, chef Melissa King, athlete Naomi Osaka, TV personality Padma Lakshmi, and comic book artist Jim Lee in sharing their different cultures and passions with the residents of Sesame Street in the special. Ji-Young will then lead the special’s entire cast in singing “See Us Coming Together,” a reimagined version of the classic Sesame Street song “The People in Your Neighborhood.”

Ji-Young isn’t the only new face coming to Sesame Street. Season 52 of the beloved series will also see Elmo’s new puppy Tango join the residents as a regular live and animated character. Catch See Us Coming Together: A Sesame Street Special and Ji-Young’s debut on Thursday, Nov. 25 on Cartoonito on HBO Max, PBS KIDS, and Sesame Street’s YouTube, Facebook, and Instagram channels.

More Like This
Bluey Creators Set The Record Straight About That Rumor The Show Is Ending
Take An Exclusive Look At A New 'Daniel Tiger’s Neighborhood' Episode About Pool Safety
Exclusive: Mickey Mouse Funhouse Introduces Deaf Character Named Fig
Obi-Wan Kenobi On Disney+ Is More Kid-Friendly Than You Probably Expected