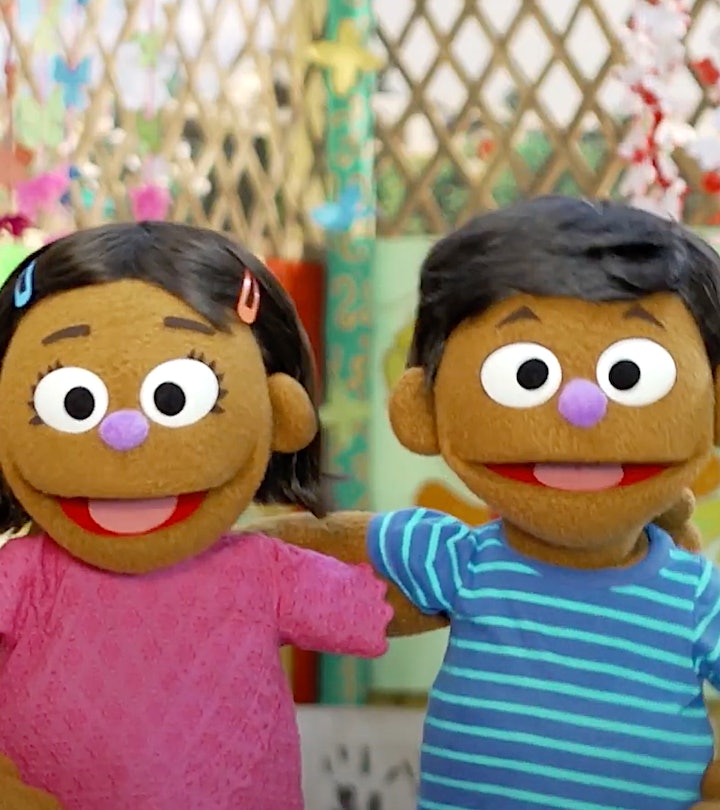 Aziz and Noor will join the cast for a Rohingya-language program developed specifically for children living in the world's largest refugee camp.

As part of a humanitarian program aimed at supporting the children and families affected by the Rohingya refugee crisis, the nonprofit behind Sesame Street is introducing two new Rohingya muppet characters. The muppets will star in Rohingya-language educational media developed by Sesame Workshop in an effort to bring early childhood education to families living in Kutupalong, the world's largest refugee camp.

Named Noor Yasmin and Aziz, the two muppets are 6-year-old twins who live with their family in the Kutupalong refugee camp in Cox's Bazar, Bangladesh. Described by Sesame Workshop as a confident and deeply curious girl who loves to learn and play, Noor has a passion for asking questions. She loves to make up new rules for games and often uses play to help her understand the world around her. Aziz meanwhile is described as a creative natural performer and storyteller who loves to use his imagination to play pretend, but can sometimes find himself distracted from his tasks by that same imagination. Still, he loves helping his family and friends. English-speakers can meet Noor and Aziz in the clip below.

The muppet twins are at the core of Sesame Workshop's ongoing efforts to bring a bit of fun early childhood education to Rohingya refugee children as part of its Play to Learn Humanitarian Program, which has been made possible thanks to the LEGO Foundation.

More than a million Rohingya have fled violence in Myanmar since the early 1990s, according to the UN Refugee Agency. Under Myanmar's citizenship laws, the Rohingya have been denied equal access to citizenship and birth certificates, leaving them a stateless Muslim minority, as the UN explains. In 2019, the Australian Broadcasting Corporation reported that more than half of the refugees living in the Kutupalong camp were children with 170,000 being kids under the age of 4.

These are exactly the children Sesame Workshop hopes to reach with new, groundbreaking Rohingya-language media developed in partnership with Bangladesh-based BRAC, the International Rescue Committee (IRC), and New York University’s Global TIES for Children. "For most Rohingya children, Noor and Aziz will be the very first characters in media who look and sound like them," Sherrie Westin, Sesame Workshop's president of social impact, said in a statement shared with Romper. "Rooted in the rich Rohingya culture and informed by extensive research and input from Rohingya families, Noor and Aziz will bring the transformative power of playful learning to families at a time when it’s needed more than ever before."

Rohingya refugee children will also be introduced to classic Sesame Street characters like Elmo and Elmo's dad Louie in media segments that focus on social-emotional learning, math, science, and health and safety topics. Storybooks and other printed educational resources will also be used in conjunction with the media segments as part of integrated services offered by BRAC and IRC in the next year.

Those involved in the program hope Noor and Aziz prove to be not only great educational tools but also beneficial in helping refugee children overcome trauma and stress. "Investing in learning through play is even more crucial now, where thousands of children affected by the Rohingya refugee crisis, now face the additional unforeseen challenges posed by the global pandemic," Sarah Bouchie, the LEGO Foundation's chief impact officer said in a statement shared with Romper. "Noor and Aziz not only share similar experiences with many of the children who find themselves in this crisis, they will also help these young children to overcome trauma and stress, and build resilience, while engaging in fun play-based learning activities."