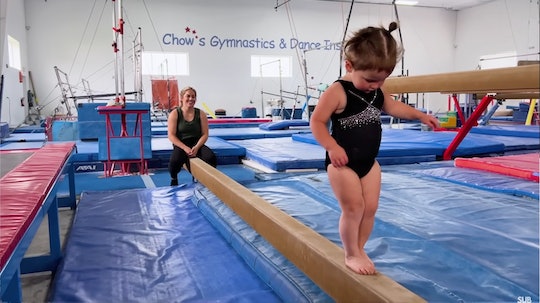 “She really opened up on the trampoline because she found her little happy place.”

Sparkly leotard is on. Hair is secured with two tiny ponytails. A look of fearless determination rivaling Shawn Johnson herself is set on Drew’s face. The 2-year-old looks just like her Olympic gold-medalist mom in a new video of her first gymnastics class at Johnson’s former gym — and she is already a little star on the balance beam!

Johnson took Drew, who she shares with husband Andrew East, to Chow’s Gymnastics & Dance Institute in Des Moines, Iowa, yesterday. She posted a video of the toddler gripping the steady rings, dropping into a foam pit (with perfectly pointed feet!), and giving Johnson’s former coach, Liang Chow, a high-five. But the coolest moment was when Drew walked the same balance beam that her mom trained on before she won a gold medal in balance beam at the 2008 Summer Olympics in Beijing. What a fantastic full-circle moment for the athlete, who is also mom to 1-year-old son Jett.

“This was such a special day,” Johnson captioned the sweet video. “@drewhazeleast met my gymnastics coach and played in the gym.”

“Omg the legend continues,” another said.

“The way she just JUMPED into that pit,” one person praised.

“That dismount, and her pointed feet…ok girlfriend! 😍” someone else commented. “She’s definitely a brave one, and looks like she was having fun. That’s what I love to see about your kiddos. They aren’t afraid to have fun (even at the expense of your nerves 🤣).”

Johnson also posted a longer video of their day on The East Family YouTube channel. “This is one of my favorite videos ever. Taking Drew to the gym I grew up in and realized my dreams was beyond special,” Johnson, who also won three silver medals at the 2008 Olympics, wrote. “Seeing how happy she was… I have no words. I hope you enjoy this video as much as we did.”

The almost 10-minute video starts with Johnson doing a flip on the trampoline, then Drew practicing her tumbling. The short, chubby thighs! The diaper poking out the leotard! It’s amazing.

“We’re back at Chow’s Gymnastics, I trained here for 20 years,” Johnson says in the video. “This is the coach that got me to the Olympics, and I think it’s time for a comeback. But this time, with this one.”

“First time meeting Chow,” she says as she picks up Drew, then jokingly adds, “First training session.” Johnson’s parents, Teri and Doug Johnson, came along to watch, too.

East commented that Drew’s favorite place in the gym was the tumble track. “I think she spent two hours there and was the sweatiest little kid I’ve ever felt in my entire life and also so tired by the end of it,” Johnson said.

“She really opened up on the trampoline because she found her little happy place,” Johnson added. “Which, full circle moment, was the reason I started gymnastics. I went to an open gym, I found the trampoline, I spent two hours on the trampoline, and my mom signed me up for classes. The trampoline made me believe I could fly and that’s when I fell in love with the sport.” Teri revealed that Johnson was only 5 years old the first time she met Chow and started training with him.

Even Jett got in on the action! Chow held him up to the beam, which he used as a teether in an adorable moment that made Chow throw his head back in laughter.

“I was OK,” Johnson laughed, then shared that her daughter got to walk on the same balance beam that Johnson trained on.

At one point in the video, East asked if this experience was weird for her, and Johnson responded, “It’s like the most trusted place for me. So, yes, and no.”

Although she’s clear that she isn’t pushing her kids into gymnastics, she knows that if they choose to get into the sport, she will bring them to Coach Chow.

“I want Drew and Jett to do whatever they feel called to in life, whatever sport, hobby, passion, activity,” Johnson said in the video. “But if either of them choose gymnastics, there is nobody else in the world I would want to coach them than Chow.”

Who knows? Maybe Drew will compete in the 2036 Summer Olympics!