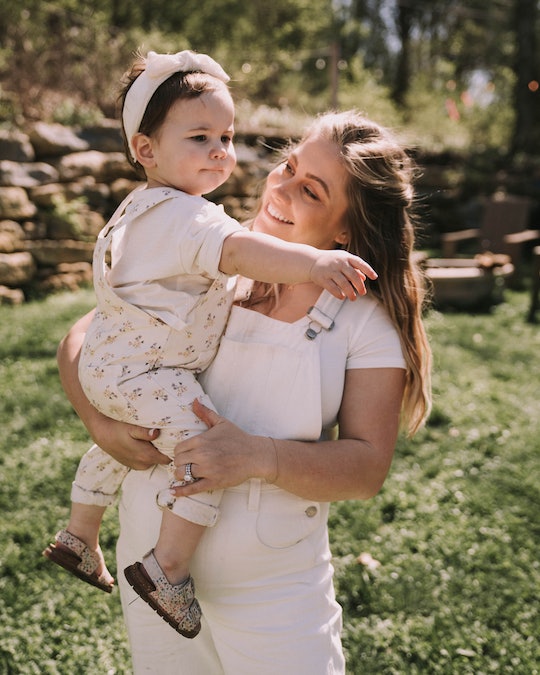 “At that moment that I was like, OK, I need to have a community around me to really help me through this, step-by-step.”

In a recent Instagram post, former World Champion gymnast and Olympic medalist Shawn Johnson East announced her “comeback” for the 2021 Tokyo games. Donning her leotard from the 2008 Beijing Olympics, she smiled confidently into the camera with a hand resting on her six-months pregnant belly.

OK, so she’s not going to be sticking the landing on a twisting Yurkchenko anytime soon, but considering the gold-medalist hung-up the leotard at the ripe old age of 20, retirement doesn’t mean BINGO and shuffleboard for Johnson East. She and her husband, pro-football player Andrew East, share content across social media, including YouTube and Instagram and boast more than 5 million followers. And, certainly, a pregnancy and their adorable 18-month old daughter, Drew Hazel, keeps them busy. Johnson warns Romper not to be taken in, however, by the toddler’s overwhelming cuteness. “Don't let her fool you,” she says by phone from her home in Nashville. “She's filled with sass and she's too smart for her own good. She knows how to manipulate anyone.”

Most recently, the former Olympian has teamed up with the March of Dimes for It Starts With Mom. The week-long event features activities across social media to celebrate and support moms and moms to be, and raise awareness about the changing role of motherhood and the need for community support. The week’s signature event, It Starts With Mom Live, will be hosted by Johnson East on May 7 at 2:00 p.m. ET on March of Dimes’ Facebook channel.

Johnson East says it wasn’t until one day in that never-ending third trimester of her pregnancy with Drew that she truly grasped the need for community and support. “I literally feel like I know the moment,” she says. Months of high-risk concerns and hormones and slow realizations came to a head and she had a meltdown. Andrew tried to soothe her – it wouldn’t be much longer now. The end was in sight. “But I remember telling him, ‘No, babe. You don't understand. When she gets here, it's not a finish line, that's the starting line,’” she says. “I realized it was at that moment that I was like, OK, I need to have a community around me to really help me through this, step-by-step.”

It’s something her continued involvement with March of Dimes has helped with, particularly in her connection with other moms, who understand exactly what she’s going through. She and Andrew have also made a concerted effort, from day one, to be proactive in the arena of maternal mental health. As someone who has struggled with body dysmorphia and eating disorders, Johnson East was all too aware of how potentially triggering pregnancy might be. But while pregnancy “took a while to get used to,” (understandable under the best of circumstances let alone for an elite athlete used to mastery over their body), she was pleasantly surprised to find that pregnancy actually helped her.

Last time, I went so blindly into parenting thinking and believing that I could control everything...

“I felt like it was no longer my body, so I didn't care. Not in like a careless way!” she clarifies. “It was no longer my body for me to superficially change whatever I wanted or disliked. It was my body growing my child.” She says she almost thought of her pregnancy as a training program and she was the coach, making sure her daughter got everything she needed.

Still, Johnson East and her husband remain vigilant about communicating as parents. “I over-communicate everything,” she says. “I'm like, babe, this is how I'm feeling. This is why I'm feeling this way. Even if he thinks it's crazy, I think it just helps your spouse or your partner really support you.” And now, this second time around, she feels like she’s in a better place when it comes to giving birth in the summer.

“Last time, I went so blindly into parenting thinking and believing that I could control everything,” she says. But an emergency c-section and difficulty breastfeeding, she says, showed her that when it comes to babies, preparation and training will only take you so far. “You just very quickly learned that as a parent, it's a two-way street. I think going into this pregnancy, I'm just more equipped to be a little more laid back and figure out what this little man is all about.