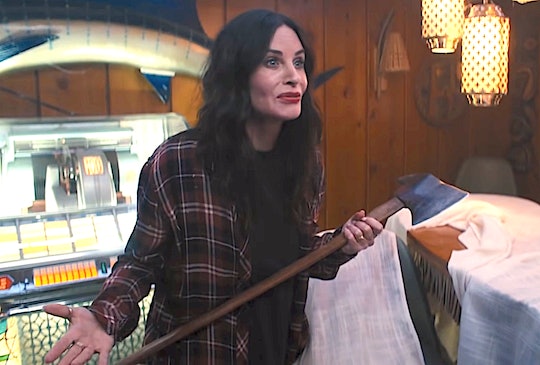 Everything You Need To Know To Watch Shining Vale

The series is a star-studded homage to classic horror with a comedic twist.

Have you ever thought to yourself “I’m kind of in the mood for a horror series, but something that’s also funny”? Then boy do we have the series for you: enter Shining Vale, the new series on Starz featuring an incredible cast and fantastic premise that looks at one couple’s attempt to save their marriage in a haunted house... So here is everything you need to know before it premieres.

Shining Vale is a horror/comedy homage to Stephen King

The series follows Pat Phelps, a writer who rose to fame 17 years ago with her women’s empowerment novel filled with drugs, alcohol, and lots and lots of sex. But now, the sober mom of two teens is fresh out of inspiration (maybe because she hasn’t had sex with her husband, Terry in ages). It’s been nearly a decade since she wrote anything substantial, and her next deadline is looming. When she’s caught having an affair, she and Terry decide to try to save their marriage by leaving the city for Connecticut, a state with equal parts “sense of tranquility” and “sense of dread.” Their new house is large and beautiful (who cares if it’s the site of several horrifying murders!), but no one but Pat seems to feel the house’s ominous sense of menace. Before long, she begins seeing Rosemary, an otherworldly presence in the house who becomes Pat’s new muse... kind of. She possesses Pat to help her write her new (filthy) book. But is Rosemary Pat’s alter ego? A kindly ghost? Or a demon?

Entertainment Weekly described the series as “a gender-swapped homage to The Shining” and... yeah, it sure seems that way. Struggling writer, creepy haunted house... the trailer even features a scene with Pat wielding an axe à la Jack Torrance!

The Shining Vale cast is full of big comedy names

Courteney Cox plays Pat, and she described the role as “the most layered character I ever played” on The Howard Stern Show. “I get to be [someone with] a dry sense of humor, a mom of a 17-year-old … going through menopause. She’s depressed, she is possessed, and no one believes her.”

Rosemary is played by Mira Sorvino (no word on whether she’ll don a blue metallic baby doll dress and dance to “Time After Time,” but a girl can dream) and Greg Kinnear plays the dopily optimistic Terry. Additional cast includes Merrin Dungey as Pat’s oldest friend/editor, Kam and Gus Birney and Dylan Gage as the couple’s teenage kids, Gaynor and Jake.

You can watch Shining Vale on Starz

The first two episodes of the eight will come out on March 6, but after that they will be released one at a time every Sunday at 10 p.m. across all Starz platforms in the U.S. and Canada and day and date internationally on the STARZPLAY streaming app.

You can access Starz as an add-on on Hulu or simply sign up for the Starz subscription service, which is available on multiple streaming devices like Roku, Apple TV, and Fire TV Stick.

As you’ve probably guess by now, this show is NOT appropriate for kids

The series is rated TV-MA, which you may have guessed either when we said it was a horror comedy... or perhaps when we mentioned Pat’s book all about drugs, alcohol, and lots of sex... or the affair. Or the horrifying murders. So... yeah, go ahead and wait until the kiddos are asleep to watch this one.

More Like This
'Call The Midwife' Is Coming Back For At Least Two More Seasons
Take An Exclusive Look At A Brand New, Four-Part Peppa Pig Special
Quinta Brunson Is Giving Back To The School That Helped Inspire 'Abbott Elementary'
SNL Swaps Clever Toddlers With Hopeless Boyfriends In Hilarious Old Enough Spoof