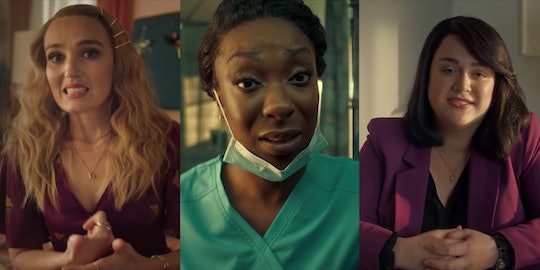 "I guess since you won't be coming, I'll just throw your stocking in the fire."

While there's not much to joke about when it comes to the coronavirus pandemic, Saturday Night Live (SNL) has found a way to turn some of the worst aspects of 2020 into comedy gold. For anyone who's had to call family and cancel holiday plans, SNL's recent Christmas Conversation skit is all too relatable. In it, adult children deal with the fallout of having to tell their parents they won't be coming home for Christmas. And it seems not even a global pandemic can stop parental guilt trips.

SNL's sketch opens with series regulars Lauren Holt, Ego Nwodim, and Chloe Fineman nervously FaceTiming their mothers — played by Heidi Gardner, Punkie Johnson, and Kate McKinnon — to tell them they won't be traveling home to visit for the holidays. It's a conversation that, in the real world, many families are having this year following the U.S. Centers for Disease Control and Prevention (CDC) repeated pleas to forgo holiday travel and gatherings with friends and family you don't already live with.

But as Holt, Nwodim, and Fineman discover, not all parents take the news that a global public health pandemic has put a damper on holiday plans well. "Oh, honey. You do not need to come home for Christmas this year. I just want you to be safe," Gardner, who plays Holt's mom in the sketch, says. "I guess since you won't be coming, I'll just throw your stocking in the fire."

The three moms try everything from dramatic guilt trips to bargaining to avoidance and even a little bit of blackmail. "If you don't love me, Marie, just say so. I didn't raise a coward," McKinnon's character says before turning to Plan B. "Fine, we will fly to you," she tells Fineman. "It's fine, I will quarantine in the plane bathroom."

For Nwodim's character, her mother's anger is palpable. "Let's talk about this later," Johnson's character says. Later as in, "When you've changed your damn mind." Johnson later drops the dreaded "your daughter" line when Nwodim's father, played by Kenan Thompson, joins the call and then bluntly brings up how single Nwodim is. "Who you out there seeing that you can't come home, huh?" Johnson's character says. "I know you ain't got no man."

Meanwhile, Gardner's mom character attempts to force her daughter to return home by threatening to throw away items from her childhood if she doesn't show. "I totally agree about Christmas, but I do need you to come home tonight," she says. "There has been an emergency because I actually put all your old stuff in bags and I'll need you to tell me what to donate." Ouch, Mom.

While the sketch looks a little too much like reality for some of us, who couldn't use a chance to laugh off the awkward moments of this year's holiday season?