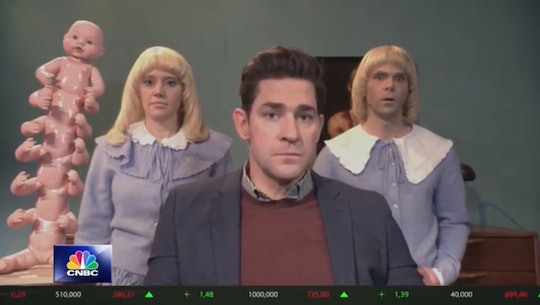 John Krasinski hosted Saturday Night Live this weekend and, as a horror fan and a work-from-home parent, I was particularly impressed with SNL's working from home with creepy kids skit. The sketch hinges on the melding of two disparate situations: kids interrupting work and an all too familiar horror trope, and it was done in a pretty hilariously genius way. Let's break it down.

First: kids interrupting virtual meetings. Surely we all remember the delight of Professor Robert Kelly's children interrupting his interview with the BBC. (The confidence of that wee toddler gives me strength to this day.) And, certainly, it's something we've all become accustomed to during the pandemic. Honestly: who among us can say a child has not Zoom-bombed a meeting since we collectively discovered Zoom in March of 2020? Just the other night my 6-year-old took it upon herself to do bizarre dance moves behind me for no apparent reason while I had a virtual cocktail hour with friends. (Fortunately they're accustomed to her hijinks.)

The second trope is that of the Creepy Twins. Creepy children make for some of the best horror. The Ring, The Omen, The Exorcist. But near-identical creepy twins, like in The Shining (and, to some extent, The Village of the Damned)? Look, one creepy child is bad enough. Two creepy children will haunt your nightmares. Because they have a bond, you see... a bond they will use to plot. Jacob and Josephine (Kate McKinnon and Mikey Day) of SNL's skit are no exception.

But Krasinski's Craig Steer, an amiable economist working from his Connecticut home as an analyst on The Dividend, doesn't see them that way. He's just a "proud papa." He brushes off Jacob and Josephine's jump-scare interruptions and is happy to show off their grotesque and unsettling artwork. ("This one's called Centipediatric.") Hosts Mischa Shumway (Cecily Strong) and Dale Tillman (Beck Bennett) are not so sure. See the full sketch below.

Everything about this was great... and no, of course I'm not just saying that to avoid angering twins...