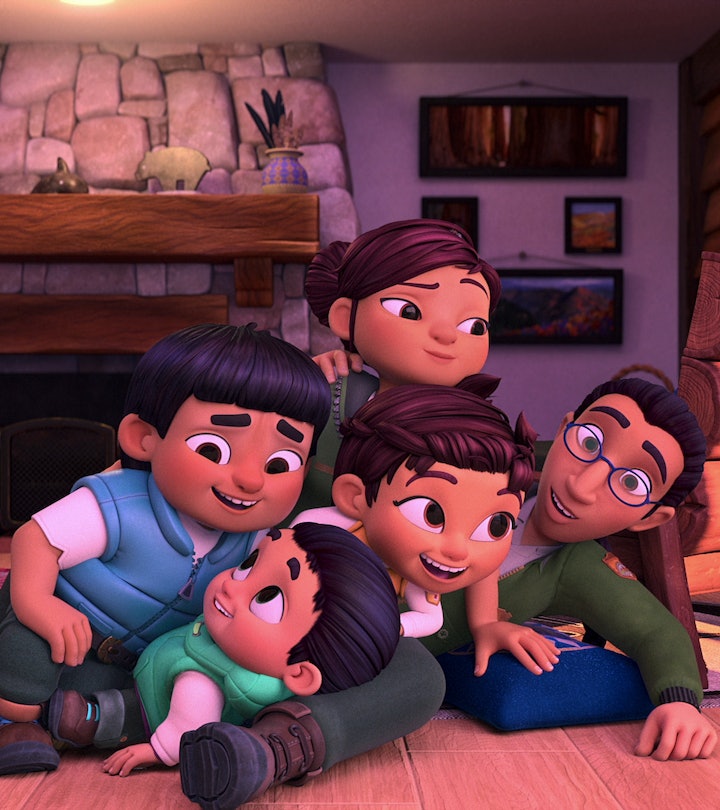 Growing up, Karissa Valencia — a member of the Santa Ynez Chumash tribe in California — didn’t see herself reflected in media and pop culture. “And if I did, it was always horrible, terrifying situations — leathers and feathers or poverty,” she said in a statement. “And I thought, Native kids are so full of life and joy and adventure, and we also make mistakes and have crazy families.” Her culture was also one with incredible stories and storytelling traditions. “A lot of our stories are very similar to Grimms’ Fairy Tales, which of course has taken over Disney. If Grimms’ Fairy Tales can do it, why can’t we as well?” And so Spirit Rangers, a new preschool adventure series on Netflix, was born.

Spirit Rangers, which will premiere on the streaming service on Oct. 10 — Indigenous Peoples’ Day — follows the Skycedar family, members of the Samala Chumash and Cowlitz tribes, who live in the fictional Xus National Park in California. Mom and Dad are park rangers while Kodi, 8, Summer, 7, and Eddy, 6 have been declared “junior park rangers.” But the children have a secret: using Chumash T’aya necklaces made of abalone shells, the trio are able to transform into their Spirit Ranger counterparts!

Confident Kodi becomes a grizzly bear, fun-loving Summer can transform into a redtailed hawk, and shy Eddy becomes a turtle. Their transformations allow them to see the park in a different way — as Spirit Park. Where campers look up and see the Milky Way, the Spirit Rangers see a snake spirit made of stars! There are spirits all around them, including the mischievous Coyote and anxious Lizard.

The dual nature of the environment was not only a fun storytelling device, but an important aspect of the show’s message, according to Valencia. “Seeing that nature is alive was important to show,” she notes. “At the risk of sounding like such a millennial, we imagine Spirit Park as being like an Instagram filter of what it really is. Those trees are alive, the sky, and the stars and the moon — everything has a purpose and is connected. I’m hoping that when people walk past trees, they’ll think twice about them. They’ll remember that these things deserve to be respected.”

Spirit Rangers is steeped in the stories, language, art and iconography of a variety of tribal nations, including Chumash, Cowlitz, Pomo, Cherokee, Kumeyaay, Choctaw, Haudenosaunee, Lakota, Inuit, Luiseño, and more. Valencia and her team sought permission from the Chumash and Cowlitz communities to base the Skycedars’ heritage on their tribes. The communities not only gave their blessings, but actively collaborated with the artists, show-runners, and all-Indigenous writers room to make sure the series depicted Chumash and Cowlitz characters and culture with the dignity, respect, and authenticity.

In this exclusive sneak peak of the trailer, we get to see the spirit-filled world of the Skycedar family as they protect the land and grow together.

Check out Romper’s exclusive look at the new series.

Valencia hopes that the series will entertain young audiences, and help teach them the sort of things many preschool-centered shows do: community, kindness, responsibility toward family and nature. But she also hopes she can present Native people in a way many audiences might not be used to. “I want [audiences] to know that Native people are still here. We are not invisible,” she says. “We’re very much alive and well and have our own cultures and are connected to the past, but we’re also doing cool things in the present and our future is so bright.”

More Like This
Kid First Responders Rescue Puppies In Disney’s Cute New Series
'The Proud Family: Louder & Prouder' Is Returning For Season 2 On Disney+
15 Awesome Movies For Families To Watch During Hispanic Heritage Month
'Workin’ Moms' Season 7 Is Reportedly In The Works! Here’s Everything We Know