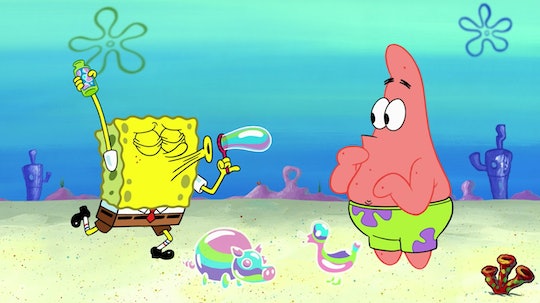 An episode of SpongeBob SquarePants where characters are forced to quarantine inside the Krusty Krab after someone comes down with "Clam Flu" has been pulled from streaming circulation due to concerns the storyline isn’t appropriate given the current global pandemic. But it isn’t the only episode of the animated children’s series to get the heave-ho. Nickelodeon has pulled two SpongeBob SquarePants episodes over concerns about their storylines.

Nickelodeon has decided to pull “Kwarantined Crab,” an episode from the show’s 12th season, over concerns the virus-focused plot may no longer be a fun and carefree story for children given the ongoing coronavirus pandemic. The episode will no longer air on Nickelodeon and has been removed from the streaming platforms Paramount+ and Amazon.

"We have decided to not air it due to sensitivities surrounding the global, real-world pandemic," a spokesperson for Nickelodeon told CNN Business.

In the episode, a health inspector quarantines diners and employees at the Krusty Krab following an outbreak of “Clam Flu.” As fear takes hold while in quarantine, characters presumed to have the made-up virus are shamed, ostracized, and forced to isolate in a refrigerator by the others. And while SpongeBob SquarePants is a fictional series — and this particular episode was written long before the coronavirus pandemic — it’s hard not to see certain real-life parallels.

Along with a reported rise in prejudice and attacks against members of Asian communities, the coronavirus pandemic has also seen a stigmatization of individuals exposed to the virus. In May, The New York Times spoke to COVID-19 survivors who reported being spurned well after doctors gave them a clean bill of health. In November, medical workers serving on the frontlines of the pandemic told Healthline family and friends had shunned them due to their job’s potential for exposure. So it’s not altogether surprising that Nickelodeon is hesitant to continue airing “Kwarantined Crab.”

The second SpongeBob SquarePants episode to be officially pulled from streaming circulation is “Mid-Life Crustacean,” an episode from Season 3. In the episode, Mr. Krabs joins SpongeBob and Patrick for a night of hijinks in Bikini Bottom. The trio break into a house where they steal a pair of women’s underwear. They’re quickly caught by the owner of the underwear, who is revealed to be Mr. Krab’s own mom. Nickelodeon Executive Vice President of Communications David Bittler told NBC News a standards review had determined some of the episode's story elements were not appropriate for kids.

Both episodes have been removed from Paramount+ and “Mid-Life Crustacean” has been dropped from Amazon Prime Video, which carries the first six seasons of the show.