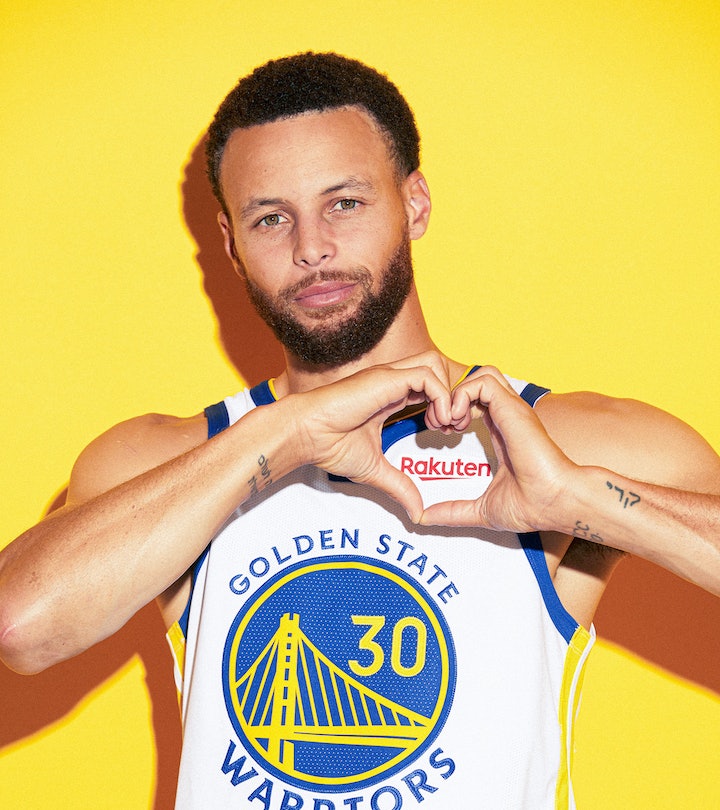 Stephen Curry Wants Kids To Own Their Education

“We want them to enjoy what school means and not make it a chore.”

When Golden State Warriors star player Stephen Curry thinks back on his own back-to-school memories, the first word he can think of is “pride.” “Showing up with your backpack, full of your school supplies, having your day one outfit that you probably laid out the night before and were so excited to go back to school,” he tells Romper by phone. “It sets the tone for the rest of the year.” It’s this sense of pride that has motivated his goal of having kids take “ownership” over their own education. That includes his own kids — Riley, 10, Ryan, 7, and Canon, 4 — and children throughout Oakland via Eat. Learn. Play., the foundation he began with his wife, actress and cookbook author Ayesha Curry.

Established in 2019, Eat. Learn. Play. seeks to unleash the potential of every child via nutrition, education, and physical activity by providing access to nutritious food, resources to become better readers, and safe places and equitable opportunities to play. Recently, the foundation partnered with Rakuten, a cash back shopping app, for a very special project that will allow students at Oakland’s Garfield Elementary to take ownership over their own education in a way they haven’t been able to for a decade.

“They've had a library that's been under construction and out of use for the last 10 years,” Curry explains. “And so we've been able to partner with Rakuten to reopen that library, and also up level it to include some very comfortable furniture for the kids to enjoy, culturally diverse books, an arts and crafts corner for them to foster and build their imagination. We’re excited about it, and when we announced it to the kids and they were very excited about it, so I think they're going to make great use of it.”

Supporting children in what Curry calls their “literacy journeys” is a main pillar of the foundation. “Children from underrepresented minority communities, are significantly behind their counterparts in terms of being on grade level reading,” he explains, noting that culturally diverse stories from diverse authors can play a significant role in making reading more relatable and engaging to early learners. “If they can be at grade level reading by third grade, there are a lot of markers as to that [leading] into high school completion. And that's obviously a huge goal for us to attack.”

For his own kids, asserting ownership over their own education is encouraged with a similar approach... despite the fact that doing anything with three young children is “chaotic.”

“We want them to enjoy what school means and not make it a chore or something that they have to do. So it's a fun process,” he says. That includes involving them in back-to-school shopping, pumping them up for the first day, and starting the year with the “right perspective.” “All those decisions and how you approach it matter.”

Fortunately, Curry and Ayesha have a “back to school” assistant in the form of Riley, their oldest, whom he calls the encouraging “voice of wisdom” for her younger siblings, assuring them that school really is fun. It’s appreciated: this is the first year all of the Curry children will be in school. (Canon, the youngest, recently began pre-K.) Curry recognizes that this milestone catapults him into a whole new level of parenting — it’s a brand new era of “big kids” — and he has some feelings on the matter.

“It's all the emotions,” he admits. “Once they start to hit school age that train starts going and doesn't stop until hopefully they finish college. There's so many things that are surprises. So many things that are just so rewarding when you can see how they develop every year and look back at how far they've come. I’m looking forward to what that means for our kids over the next 14 years, which is kind of great to say.”