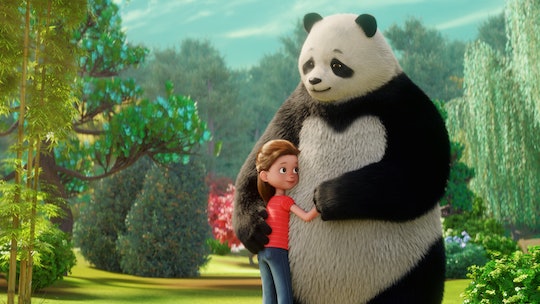 Stillwater is full of lessons to encourage little ones to expand their perspectives.

When a wise panda named Stillwater moves in next door, siblings Karl, Addy, and Michael gain the opportunity to gain new perspectives of the world around them and a deeper understanding of themselves and their emotions. The series boasts both beautiful art and wonderful storytelling, making it a children's show even parents will enjoy. Not convinced? Check out an exclusive clip from Stillwater, which Apple TV+ shared with Romper below.

Based on the Scholastic book series Zen Shorts that is written and illustrated by Jon J. Muth, the animated TV series Stillwater is produced by Gaumont and Scholastic Entertainment. It centers around three siblings who find a panda has become their new next-door neighbor. But Stillwater isn't just any panda, he's a panda full of stories and lessons that propel Karl, Addy, and Michael into new ways of thinking.

Take the exclusive clip Apple TV+ shared with Romper, for example. In it, a raincoat-clad Michael approaches Stillwater with an umbrella as he is sitting in his yard during a rainstorm. "Do you need an umbrella?" Michael asks. "I noticed you didn't have yours."

When Stillwater responds that he doesn't need an umbrella because he likes to feel the raindrops falling on his fur, Michael seems confused at the idea that rain might be enjoyable. "Won't you get all wet?" the young boy says while showing off his umbrella, raincoat, long pants, and rain boots. "You're supposed to stay out of the rain. See? Perfectly dry."

But Stillwater explains that he loves the rain and enjoys thinking about each tiny raindrop. "I always think about the journey each of these little raindrops has taken in their life," he tells Michael. "This one could have come all the way from China, carried here on a cloud. Welcome to my garden little raindrops. Come and rest yourselves after such a long journey."

For Michael, Stillwater's attitude is a new way of looking at the rain. "When you think of it that way the rain doesn't seem all that bad," Michael concludes.

"Thinking of things a different way is good," Stillwater responds. "We call that perspective."

The latest animated children's show to hit Apple TV+ features the voice talents of James Sie from Jackie Chan Adventures, Kung Fu Panda: Legends of Awesomeness, and Avatar: The Last Airbender as Stillwater; Judah Mackey of The Morning Show and The Young and the Restless as Karl; Eva Binder of Grey's Anatomy, All Rise, and Imaginary Lines as Addy; and Tucker Chandler of Madagascar: A Little Wild, I Lost My Body, and Samsam as Michael. You can check out Apple's official trailer for Stillwater here to see what other sage wisdom Stillwater has in store for the three young siblings.

Six episodes of Stillwater will premiere Friday, Dec. 4 exclusively on Apple TV+. Each episode will feature two stories that center around the siblings' fun adventures and the lessons Stillwater teaches them about themselves, the world around them, and their place within it.

More Like This
Here’s How To Watch 'A Charlie Brown Christmas' This Holiday Season
Exclusive: 'Firebuds' Dives Into Hanukkah Traditions In Festive New Episode
20 Heartwarming Episodes To Help Prepare Your Child For A New Sibling
Surprise Your Kids With This Exclusive Sneak Peek At Mickey Saves Christmas