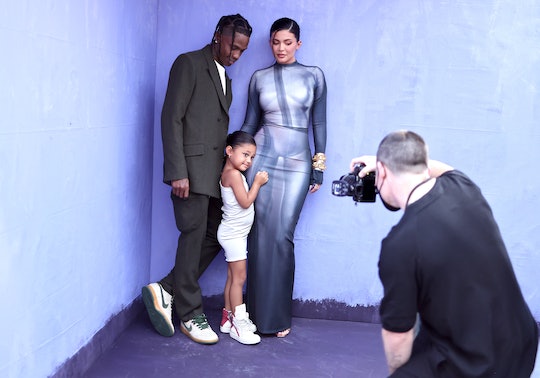 The 4-year-old captured her mom eating noodles in an adorable TikTok.

When your preschooler steals your phone, it could be a recipe for mayhem — you ordered what?! — or it could result in the most ridiculously cute moment. It was the latter for Kylie Jenner. Her 4-year-old daughter Stormi used her mom’s phone to make her first TikTok, and the resulting video is absolutely adorable, especially the moment Jenner caught on to what her daughter was doing.

Stormi, whom Jenner shares with Travis Scott, has often appeared in the Kylie Cosmetics founder’s TikToks. Like the one she posted Friday, where Stormi and Jenner take turns modeling high heels in Jenner’s closet. But this is the first time the little girl has made a TikTok entirely on her own, and she looks like she’s having so much fun.

In the first few seconds of the TikTok, it’s a selfie view that shows just the top of Stormi’s forehead, hair, and the ceiling above her. It seems like she’s trying to figure out what to do. By three seconds, Stormi’s entire face is in view with a funny face filter that makes her mouth and nose look huge. She’s wearing a gray-and-white striped shirt with her hair in a bun, admiring her silly face in the camera.

At one point, Stormi grins, showing off all her teeth in a huge-looking mouth. What a cutie!

Skip to 12 seconds to see Jenner, dressed in long-sleeve gray pajamas. Her hair looks wet like she just got out of the shower, and she’s eating noodles next to Stormi. The filter is still on, so Jenner looks silly with a big nose and mouth as she slurps her pasta. She then turns to catch Stormi filming her, and her eyes get so wide. She immediately reaches over to stop the video. Her reaction is everything! Being secretly filmed by your child is definitely not something the reality TV star enjoys, thank you very much.

Fans, on the other hand, loved the video. Hailey Bieber even commented, “Iconic obviously.”

Stormi has been having a blast making TikToks with her mom, who also has a 5-month-old son with Scott. On Thursday, Jenner posted a video of her and Stormi lip-syncing to the viral sound, “What’s better than one cover girl? Two cover girls!” The same day, she shared Stormi’s reaction to hearing the clip, “Stormi! You look like Mommy baby” that sounds like Jenner’s voice.