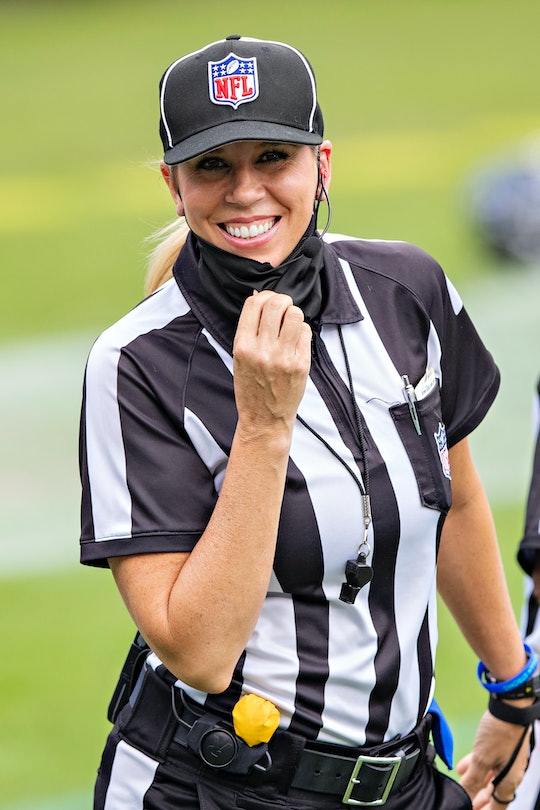 And she absolutely shines on the field.

You may have noticed a ponytail swinging behind the NFL cap of a certain referee on Sunday, and no, it wasn't a mirage. Allow me to introduce Sarah Thomas, the Super Bowl's first female referee who also happens to be an inspiring mom. With a long and varied career on the football field as a ref, Thomas was a welcome addition to the team calling fouls on Super Bowl Sunday.

Along with being the first female to officiate a Super Bowl, Thomas is also the NFL's only female official. When she took to the field on Feb. 7 to officiate the Chiefs vs. Buccaneers game, she was making history. An NFL employee since 2015, Thomas told reporters that her daughter was watching the game from home. But Thomas' presence on the field was likely noticed by more young girls than just her own, and she is aware of the impact she is having on the job.

"It's just so meaningful," Thomas told Sporting News. "I never set out to be the first in any of this, but knowing the impact that I'm having on not just my daughter, but young girls everywhere, women everywhere, when I get on that field, and I take it all in, I know that I'm probably gonna get a little teary eyed. It's just remarkable, and I'm truly honored and humbled to be a part of this year's Super Bowl crew."

Along with her daughter and girls everywhere, Thomas caught the eye of another groundbreaking woman. First Lady Dr. Jill Biden tweeted the link to a New York Times article about Thomas, along with a sweet message of support. "I'm cheering you on today, Sarah Thomas," Biden tweeted.

Thomas wasn't the only female on the field on Sunday, though. She was in the company of two female coaches for the Tampa Bay Buccaneers. Lori Locust is a defensive line assistant coach for Tampa Bay, and Maral Javadifar is an assistant strength and conditioning coach.

Even if you're not a big fan of sports, you can't help but rejoice over this solidarity and moment in history.