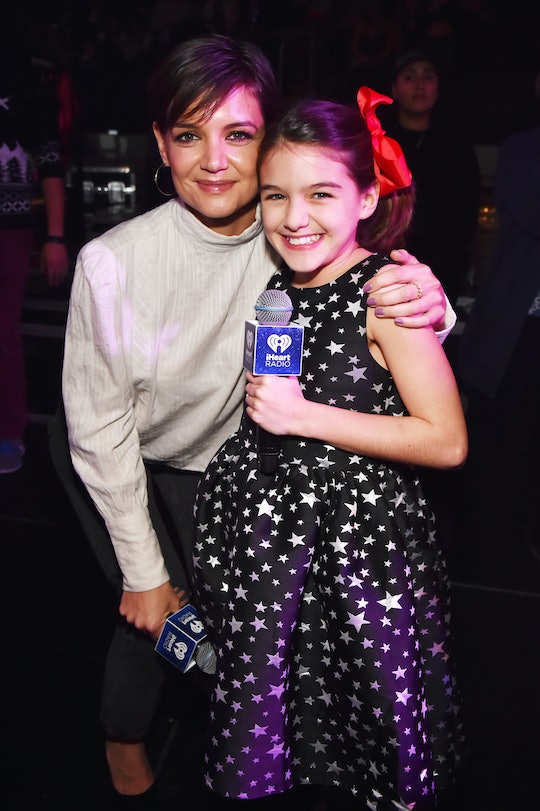 Holmes is one proud mom as her 16-year-old sings "Blue Moon” in Alone Together.

Her long brown hair and gorgeous smile aren’t the only things Katie Holmes and ex Tom Cruise passed down to their lookalike daughter Suri Cruise. The 16-year-old also got a big dose of talent from her famous parents. Recently, Suri officially made her big-screen debut in an appearance in Alone Together, a romantic comedy that Holmes wrote, directed, and starred in. Suri sings “Blue Moon” in the film, which was released 25 years after Holmes made her own feature film debut in Ang Lee’s The Ice Storm. It’s a cool full-circle moment and Holmes couldn’t be prouder of her daughter.

“I always want the highest level of talent," Holmes told Yahoo Entertainment on July 26 about her daughter guest starring in Alone Together. “So I asked her! She's very, very talented. She said she would do it and she recorded it, and I let her do her thing. That's the way I direct in general: It's like, 'This is what I think we all want — go do your thing.'"

Holmes was only a few years older than Suri is now when she appeared in her breakout role as Joey Potter on Dawson’s Creek, which ran for 6 seasons from 1998-2003. She’s since transitioned to a film career, starring in Batman Begins, Don’t Be Afraid of the Dark, and Miss Meadows among others.

Holmes reflected on her first film in 1997. "That shoot was so exciting for me — it was my first job," she told Yahoo. "When I was there, I didn't really understand what was happening, but in looking at the film many times after, Ang's ability to capture worlds is so incredible. I think that he's such a poet in the way that he shoots a scene, and the dialogue he uses and how that tells the story in a very simple way. It's all about finding the simplest way to get your story across."

Now, Holmes is telling her own stories, and she loves having her daughter work with her. Later this year, Suri’s voice will appear in another one of Holmes’ movies.

"She actually did sing in Rare Objects, which is the film we did last fall," says Holmes of her third feature, a period drama based on the 2016 bestseller by Kathleen Tessaro that will be released on December 31, 2022.

"Other than that, she's a 16-year-old kid doing high school," Holmes added.

The song is not only Suri’s film debut, but the story behind it has a special meaning. Alone Together was in part inspired the 1987 comedy Baby Boom, which starred Diane Keaton. “Diane met my daughter when she was a year old," Holmes told Yahoo Entertainment of Keaton, who sang “Blue Moon” in the 2014 Rob Reiner film And So It Goes.

Holmes’ creative nature likely influenced Suri’s spark for singing and acting. In December 2021, Holmes told Romper, “I like spending time with people way more than worrying about gifts and things,” about her holiday traditions. “The arts and crafts and the good food… that's what I love doing during the holidays and just making it very creative.”

Watch Alone Together in theaters or rent for $6.99 on Amazon Prime Video.