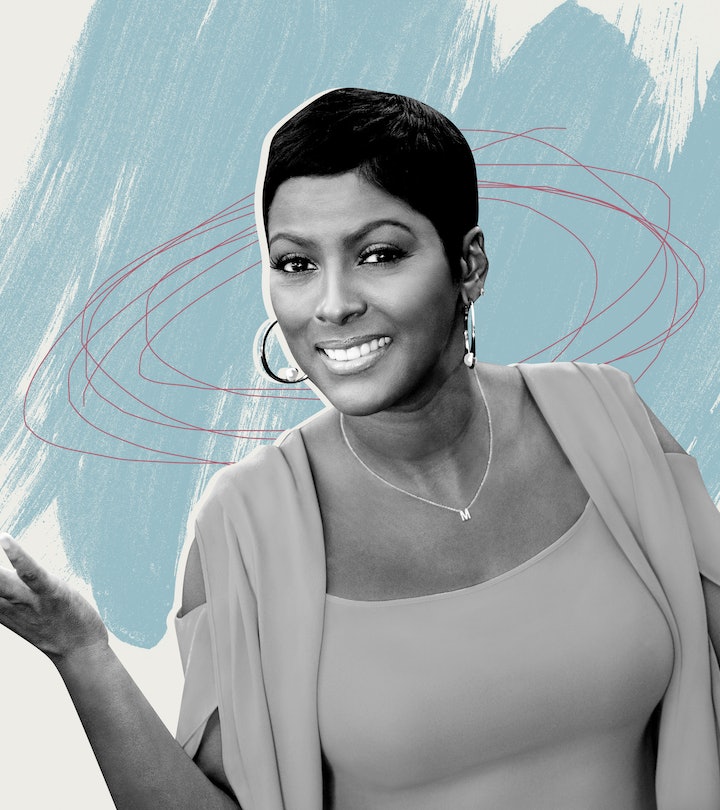 Tamron Hall Knows We're Not All Parenting Through The Same Pandemic

The new mom on her eponymous talk show, life with a toddler, and dealing with tough topics.

In some ways, Tamron Hall can relate to every mom of a toddler right now — her son has spent half his life in a pandemic, and she worries about isolation, his development, and when he'll next get to hug his grandparents. But the television journalist and talk show host also realizes that we are not all going through the “same pandemic.” On the Tamron Hall Show, where the new mom celebrated her 50th birthday last fall shortly after returning to the set post-shutdown, she works to shed light on such inequalities. By bringing together people with a diverse set of viewpoints, from all walks of life, she helps audiences see both the ugly truths and the beacons of hope.

Moving forward is something at which Hall excels, as fans saw when she famously walked away from Today when executives dared to minimize her role. After watching Joe Biden’s inauguration earlier this month, she hopped on the phone to talk to us about pandemic parenting, her new daytime TV habit (hint: Big Bird plays a big role), and how to take the lessons she’s learned from talking about tough subjects for a living into your own home.

Romper: How has the Tamron Hall Show evolved through the pandemic?

Tamron Hall: The biggest change happened in September when we moved from my home back to the studio — it was right around the time that a lot of the sports had started to return as well, and it reminded me of the influence daytime television has on all of our lives. These are bellwethers, things that tell us, "OK, we can move forward."

After 9/11, baseball came back, and it was a sign. There are these devastating things that have happened, and sports, movies, television — they turn out to be these symbols of the ability to move forward.

Walking into our studio for our very first show after the shutdown, I had to pause and recognize that moment for what it was. It wasn't about me; it wasn't about the show. It was about the ability to move forward in the most difficult time, and that was something I did not expect.

What has helped you to cope as a parent through this time?

Honestly, a lot of the open dialogue and conversation I have with the other parents on my team. We have a very diverse team, many of whom are first-time parents, on the same journey as I am, with a toddler. So, I get a lot of advice from my producers, my associate producers, and even from our viewers.

I was not a mom for 48 years, so I don't view life through the prism of just being a mother.

[On the show,] we have what we call our “Candid Conversations,” which has included topics that I always wanted to be able to bring to a show. We had a show [recently] on the secret concerns of parents during this pandemic, specifically born from a situation with my own son who, at age 9 months, went in lockdown like all of us. He's not had a playdate or been around a peer his age since then. Worries about speech and development seeped into my mind. ... We started talking with members of the Tam Fam in social forums and on our website; many parents have the same concern. So we're having this candid conversation, whether it's about a child who was born just before the pandemic or kids who are college age who suddenly have their social lives wiped away. How do we get in front of some of the things that are keeping us up at night? And that's what's helped me.

You had a year as a mom before the pandemic, and now almost the same amount of time during. How do you look at those two different timeframes? What have you missed out on; what have you gained?

I think all of us have missed out on something. I mean, my son hasn't seen his grandparents, just like so many other children. I don't have a school-age child, so in the beginning I thought, "Oh, great. He won't really miss anything," because we think of life in terms of school, what you are learning in a formal education. [Before the pandemic,] I took for granted the day-to-day parallel play that he would need or just a hug from his grandparents.

I was not a mom for 48 years, so I don't view life through the prism of just being a mother. I miss hugging my friends. I miss having a cocktail with my girlfriend face-to-face. I love to cook, and two of my friends are fantastic cooks, and we would gather at one another's homes and just have a bit of time. All of those things are gone for now. But perspective matters: I have not lost a direct family member to COVID, but I have friends who have, so it's balanced, what I lost. We've all lost a year of our lives.

What will we gain? Hopefully, myself included, we gain the resilience. We know we have the resilience because we're still standing, but I hope that we take with us what we've learned from this unprecedented time.

What do you think the country has learned? How do you hope to see us use that information once we exit the COVID era?

I grew up very, very poor. My grandfather had a second-grade education, and my mother was a single mother. I live in New York City, a few blocks from one of the largest housing projects in New York. It is not the $40 million homes that maybe are a few blocks away. So [I see that] all of us have not learned the same thing. As a mother, as a woman, as a woman of color, I recognize that we are not all suffering through this equally, including how the disease is treated.

By no means are we all going through this same pandemic or this same time.

In the early stages of this, many people of color, many poor people were turned around [when seeking medical care] or did not have access to testing. So we all have not learned one thing because we all have not experienced this the same, even in death and medical treatment.

There are ugly secrets that I hope that we're able to — collectively when we can or incrementally — give more focus and more light. But by no means are we all going through this same pandemic or this same time.

As someone who talks to people for a living, how do you suggest that we talk to our kids about that inequality and about events like those of Jan. 6 — especially how that looks compared to how the Black Lives Matter movement was treated this summer?

I think honesty has to always lead the way. I mean, how did parents talk to their children in the early '90s about Rodney King, which was on tape and on the news all day, every day? Trayvon Martin, how did we talk to our children about a boy walking with a bag of Skittles killed right outside of his fam's home? I remember my niece, who is multi-racial — her mother is white, her father, who is my brother, is Black — she said to me, "How could someone kill a kid?" And she was around his age at the time. And it just shook me to my core. My answer was, "I don't know."

As parents, we can't pretend to always have the answer, but we have to speak in truthful terms. [Our kids] are often, far ahead, far more ahead than we are in these candid conversations. And I learned that when we had a very special show, a whole hour called “Hear Us Now,” where we had the young voices from across the country who had been very vocal on social media about what happened after the George Floyd killing. We had a young white girl from the Midwest who wanted to participate in one of the protests. She described her parents as being very conservative, and they did not want her to participate. In one of the most loving and touching moments, she said, "At school, they've not taught us anything. I feel like I don't know anything about Black history, and I don't want to be a phony, and I want to know." And one of the young girls who led the protest in Minneapolis started to give her books to read off-camera, and I lost it. I just lost it.

I thought it was one of the most beautiful and inspiring things that I've had the privilege of witnessing on this talk show so far because at the end of the day, these kids want to know. They want help. And here was another peer willing to not judge her, not to say, "Oh, how could you not know? And what do you mean?" She said, "OK, if you really want to learn, let me help you."

That's how I see any conversation, whether it's on the show, whether it's in my personal life, with my friends: giving people the grace to say who they are and asking with the intention of not a "gotcha" but of curiosity, giving someone what you would want in return.

How do you deal with the stress of working in news media and talking about really tough stories, in a way that doesn’t transfer that stress to your son?

I think that with the ups and downs of life, it's impossible to hide everything. My son is very young right now, so he's not around when I've cried, like so many of us, in the middle of this pandemic. We watch the numbers of lives lost just tick up and tick up and feel the weight of it. He's not in the room when I have those moments.

Interview has been edited for clarity and length.