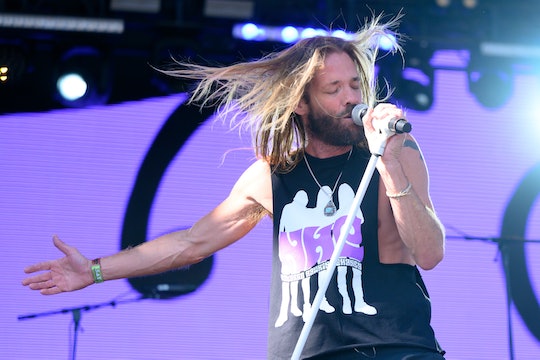 Taylor Hawkins Wrote An Album All About Being A Suburban Dad

The late Foo Fighters drummer often leaned into his role as a husband and father in his music.

Taylor Hawkins, drummer of the Foo Fighters, died on March 25 while on tour with the band in Bogotá, Colombia of unknown causes. In a statement shared on social media, the band wrote that it is “devastated by the tragic and untimely loss of our beloved Taylor Hawkins” and said their “hearts go out to his wife, children and family.” While his wife and children have kept a relatively low profile over the years, Hawkins opened up in interviews about how fatherhood and his marriage intersected with his career.

Hawkins married his wife Alison in 2005.

The late drummer married his wife Alison in 2005, after which the couple welcomed three children: Oliver, 16; Annabelle, 13; and Everleigh, 8. Oliver goes by his middle name, Shane. Hawkins was also named Oliver: Taylor was his middle name.

He wrote an album all about being a suburban dad.

Get the Money, the third album from Taylor Hawkins and the Coattail Riders was inspired by his life as a middle-aged dad. “I almost called it Tales From Suburban Hell,” he told Billboard in 2019. “Because it has a lot to do with being a 47-year-old man with a family who never thought he would be in that position. When I was 25, I never thought, ‘I’m going to be a suburban dad someday.’ But that’s what I am, so I can’t write about being young and going to clubs, and I’m not very political. It’s all sort of tongue-in-cheek though.”

Tracks like “I Really Blew It” is about manning up to apologize to the Mrs first after an argument. “Kiss the Ring” is about... well, let’s call it, “marital relations and negotiations.”’

His son Shane is also a drummer.

Shane has even been known to take over on the drums for pops with Hawkins joking to ET Canada that his eldest was “priming himself to take over my job in about 10 to 15 years.” When the Foo Fighters’ children (there are about 11 of them) would join their dads on tour, Shane would even have a practice kit set up behind him so he could play along with Hawkins.

Shane taking over on drums for Hawkins in 2018.

He wrote a song for Shane, but it never went public... for a reason.

In an interview with Joe Daly in 2020, Hawkins shared that he’d written a “sweet song” for his oldest child, with heartfelt lyrics like “Son of mine/you ready for the great big world…”

“It got all the way to possibly being on the record, so I played it for my son and he goes, ‘If you put that on your record, I’m gonna punch you in the face! If you’re gonna write a song about me, it’s gotta sound like Metallica! I don’t want some wimpy a**, p*ssy song about me, dad!’”

He wrote the song “Middle Child” for his daughter Annabelle.

But it would seem that the rock gods don’t close a door without opening a window. Hawkins told Daly, that at the same time Shane’s song had fallen through, Annabelle said, “You have to have a song for me!”

“I was like, ‘Well, I don’t know. You’re the middle child and you’re acting like a middle child right now, seeking attention and approval. Which I understand because Shane’s always in trouble and the baby’s cute as f*ck, so you’re in the middle. But you’re like my twin, too.’ She really is.”

“Middle Child” was eventually born, and includes lines that pay tribute to their special daddy-daughter bond with lyrics like “My little twin I’m here with you/Stay close and we will see it through/How I love you middle child/I see angels when you smile.”

While only Annabelle, the titular “middle child” is confirmed to be in the music video, it appears that the rest of Hawkins family appears in the official music video as well — Everleigh flipping channels at the beginning, Shane wailing on the drums, and Alison appearing at the end to turn off the TV.