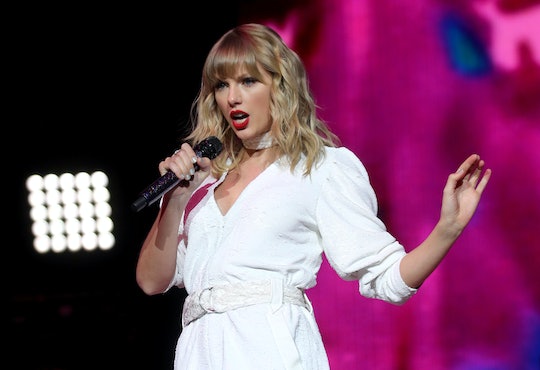 Taylor Swift May Not Be A Mom Herself, But She Speaks Our Language

Tired mamas, this one’s for you!

Falling in love is a mix of butterflies and crying nights, nervous anticipation and feelings so big you don’t know what to do with them. It’s confusing, it’s enchanting, it’s the color red — just ask Taylor Swift, who’s built a career poetically capturing the excitement and sometimes heartbreak that comes from loving someone. But while her hit songs draw on her experience with romantic relationships, moms know that falling in love with your new baby feels very similar. The 11-time Grammy Award winner recently announced her 10th studio album, Midnights, is dropping Oct. 21, and it already feels like a love letter to moms everywhere.

The iconic pop star won video of the year, best long-form video, and best direction for her “All Too Well (10 Minute Version) (Taylor’s Version)” video at the 2022 Video Music Awards, becoming the first artist to win video of the year three times, per Billboard. “You guys, I’m just so proud of what we made, and I know, with every second of this moment that we wouldn’t have been able to make this short film if it weren’t for you the fans,” she said during her acceptance speech, adding, “I thought it might be a fun moment to tell you that my brand-new album comes out Oct. 21. And I will tell you more at midnight.” (Cue collective Swiftie freak-out!)

At midnight on Aug. 29, Swift announced on Twitter, “Midnights, the stories of 13 sleepless nights scattered throughout my life, will be out October 21. Meet me at midnight.”

The “Carolina” singer also posted her album cover and more details about the inspiration behind Midnights, which all exhausted mamas can relate to:

“We lie awake in love and in fear, in turmoil and in tears. We stare at walls and drink until they speak back. We twist in our self-made cages and pray that we aren’t — right this minute — about to make some fateful life-altering mistake.”

The “Message in a Bottle” singer has inadvertently nailed the rollercoaster of thoughts and emotions moms go through. I remember being pregnant, tossing and turning with an aching back, uncomfortable heartburn, and a wildly kicking baby, wondering how I was going to handle becoming a mom (or taking care of two, or three kids). I, too, would lie awake in love and fear, already caring so much for my growing baby, yet terrified that I wasn’t going to measure up as a mom.

When my firstborn arrived in 2017, I experienced postpartum anxiety and the first of many sleepless nights with a crying, colicky newborn. Staring at walls until they speak back, praying I didn’t make a mistake in choosing to become a mom with my husband of one year. I was attempting to breastfeed my 3-day-old, fussy, jaundiced baby with sore nipples and no sleep when “Look What You Made Me Do” was released at midnight. I remember sobbing listening to Swift’s new song on repeat, as I struggled with unwanted thoughts and worries about my new baby. I’ve been a fan since Taylor Swift dropped in 2006, and her voice gave me a comfort during a challenging time on more than one occasion throughout my teen years, so it was no surprise that I turned to the enigmatic songwriter once again as a new mom.

Now as a mom of three, I’m even more excited to see what Swift has in store for Midnights. In the middle of the 2 a.m. blurry-eyed exhaustion comes rare moments of clarity, intense love, and a renewed sense of purpose. It’s hazy, undefinable, yet crystal clear at the same time. I’ve made life-altering decisions to move, to have another baby, to try for a new job in that quiet space when everyone else is asleep. There’s something about midnight that makes things I’ve worried about suddenly feel a little different.

In her tweet, Swift explains more about the inspiration behind her latest album. “This is a collection of music written in the middle of the night, a journey through terrors and sweet dreams,” she wrote. “The floors we pace and the demons we face.”

Moms have their fair share of pacing floors in the middle of the night. From soothing a crying infant to anxiously trying to ease gas or warm up a bottle or figure out latching, newborn moms are very familiar with the dark hours. But as your babies grow into toddlers and kids, moms still have to deal with sleep regressions, nightmares, sickness, and endless requests for just one more drink of water, please. Teenage moms pace for different reasons, worried about their kid’s future, waiting up for them to come home by curfew, helping them with last-minute homework. It's all so tiring, and yet, so worth it.

Swift added, “For all of us who have tossed and turned and decided to keep the lanterns lit and go searching — hoping that just maybe, when the clock strikes twelve … we’ll meet ourselves.” Yes! This feels like it was written for all the overworked, touched-out, so, so sleepy moms who pick up their lantern and keep going every day, multiple times in the night, to care for our little ones without losing sight of who we are along the way. I’ve discovered a new strength as a woman since becoming a mom — moving past my breaking point to the other side, learning to bend and twist and stand tall, find joy every moment I can. I’ve learned to hold the most cherished parts of myself close while letting go of everything else that doesn’t matter. Swift has somehow captured this feeling perfectly.

She has tapped into the mind of moms before, like with the 2012 “Ronan,” written from the perspective of Maya Thompson and her 3-year-old son Ronan, who passed away from neuroblastoma. She’s also written three songs about her mom, Andrea Swift: 2019’s “Soon You’ll Get Better,” 2010’s “Never Grow Up,” and 2008’s “The Best Day.”

Of course, many of her love songs are relatable for parents as well, like “Everything Has Changed (Taylor’s Version),” which could be describing the feeling moms have the morning after their baby is born. “All I knew this morning when I woke, is I know something now, know something now, I didn’t before,” Swift sings about meeting a man, but could also apply to seeing your new baby. “And all I’ve seen since 18 hours ago is green eyes and freckles and your smile in the back of my mind making me feel like I just want to know you better.” See what I mean?

Taylor Swift may not be a mom in the traditional sense of the word, but she’s been parenting a generation of fans for almost two decades — and defending the emotions, heartache, and experiences of women of all ages. I’ll be waiting up until midnight on Oct. 21 (to be honest, I’ll probably already be up), to listen to the musings, dreams, and fears of Tay. All moms deserve to take the space of 13 songs to relax, reflect on life and love, cry, smile, dance, and feel seen.