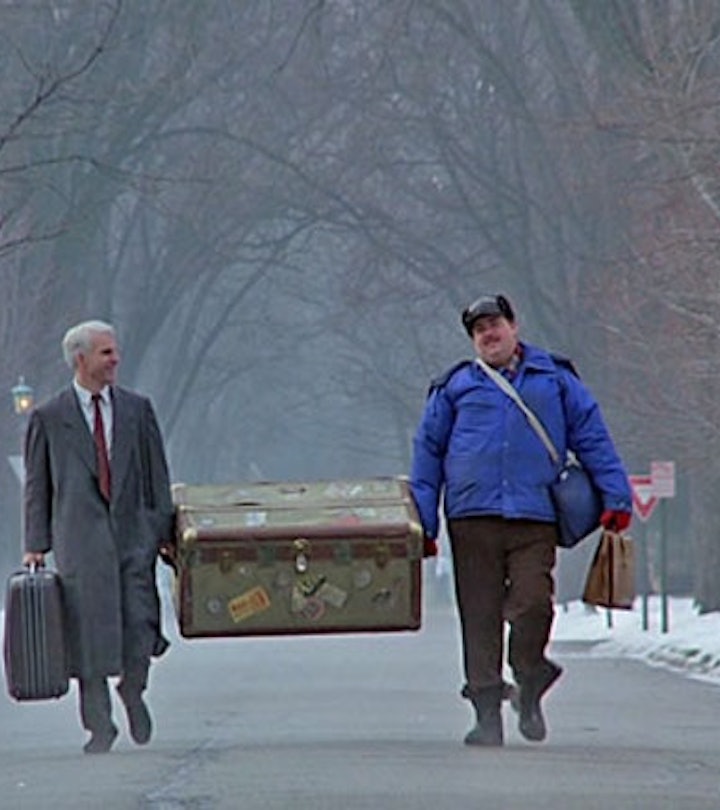 Is it really Thanksgiving if you don't watch Planes, Trains, And Automobiles?

Though countless television shows have been able to wring humor and pathos from the inherent stresses of Thanksgiving, movies can be a little bit behind the curve. The sparkle and shine of Christmas tends to dominate on the big screen, but that doesn't mean there are no options if you want a thematically appropriate holiday flick. In fact, there are plenty of Thanksgiving movies you can stream right now. Some of them might not be as readily available as others, but there are still tons of options if you want to settle in for a movie after Thanksgiving dinner.

While large family gatherings are discouraged this year due to the pandemic, Thanksgiving is the perfect time to stream a movie. Everyone's together in the same place and too stuffed to move thanks to all that eating, so it's the ideal time to snuggle in for a film fun enough that everyone can agree on it. Not all of the films on this list are available to stream for free, however; they may cost you a couple of bucks to rent or buy. But you're just a few clicks away from enjoying a movie in the comfort of your living room, so shake off that tryptophan sleepiness, dig into some pie, and get ready to watch.

This classic TV special clocks in at a quick 30 minutes, making it the perfect appetizer to start off your Thanksgiving movie marathon. You can find it to stream on Apple TV.

While everyone's favorite creepy family tends to get more play around Halloween, Addams Family Values suits more than one season. A play about the first Thanksgiving results in Wednesday taking over to deliver some well-deserved vengeance against the pilgrims — making it totally holiday-appropriate. But really, who ever regrets watching an Addams Family movie? You can watch it free on Amazon Prime.

Steve Martin's anxious attempts to get home to Chicago in time for Thanksgiving are made all the more difficult by John Candy accompanying him on the journey back. It's all about the lead up to Thanksgiving, so it could be an ideal way to ease you into the day. Stream it on Amazon through a Starz subscription, a rental, or a purchase. All three options are under $10.

A deeply '80s movie with a star-studded cast that includes Glenn Close, Jeff Goldblum, and Kevin Kline (among others), The Big Chill is about a group of friends who come together again after one of them has passed away. Their college Friendsgivings had been an integral part of the friendship, and play into their nostalgia. You can catch this one on Hulu, or with an Amazon Prime subscription.

You've Got Mail spans the entire holiday season, through Thanksgiving and Christmas, so it has all the bases covered. Whether you're still firmly ensconced in Turkey Day or already looking forward to the seasonal fun just around the corner, You've Got Mail can match your mood. You can rent it or purchase it on Amazon.

Home For The Holidays

This is, in many ways, the quintessential family Thanksgiving movie: Holly Hunter returns home for a dinner with her family that she's certain is going to go badly because of all the conflicting dynamics and complicated history. For those that enjoy character-driven movies, it could be just the right choice. Home for the Holidays is streaming on Hulu and Amazon Prime.

This Jim Henson puppet spectacular will quickly become a classic in your home. These two kids go to investigate a local legend about monsters while visiting relatives and all kinds of hilarity ensues. Stream it for free with an Amazon Prime membership.

A defenestrated turkey leads to Rocky and Adrian's first date, so it totally counts as a Thanksgiving movie, right? It's available to rent or buy on Amazon.

The Object Of My Affection

Maybe you're looking for an incredibly dated platonic rom-com headlined by two major stars who look like they haven't aged a day since its 1998 release. If that's the case, you can rent or buy The Object of My Affection on Amazon. There's a Thanksgiving scene, so it's on theme.

Boasting big names like Owen Wilson, Woody Harrelson, Amy Poehler, and George Takei — this Thanksgiving movie follows two time-traveling turkeys as they work to change the traditional Thanksgiving menu by visiting the first feast. It may have you feeling bad for the turkey thawing in your freezer, but it’s fun for the whole family. Stream it on Amazon.

Miracle On 34th Street will take you all the way from Thanksgiving to Christmas, because it starts during the Thanksgiving Day Parade and transitions into the rest of the holidays. Stream it for free with an Amazon Prime subscription.

With its central storyline set on the biggest shopping day of the year — and also the day after Thanksgiving — there are plenty of seasonal touches to earn this heartwarming and hilarious film a spot on this list. Stream it on Amazon.

Garfield is thrilled about the idea of a holiday spent eating food. But he’s not quite sure why everyone is so excited about turkey when there is perfectly good lasagna to be made. Stream this hungry cat’s holiday special on Amazon.

Hopefully one or two of the films on this list will end up being the perfect pairing with your Thanksgiving dinner.

More Like This
20 Family-Friendly Movies To Watch With Your Kids On The 4th Of July
10 Of The Raddest Movies From The '90s To Watch On Girls Night
What Exactly Are Minions, Anyway ?
13 Going on 30 Is Just As Sweet & Funny As You Remember — And Kids Will Love It Too

This article was originally published on November 16, 2017