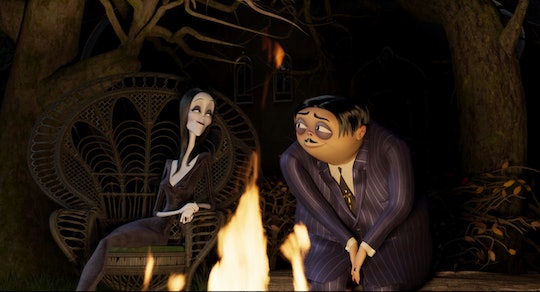 Will a family vacation help the Addams family reconnect when Wednesday and Pugsley start to grow apart from their parents?

Everyone’s favorite creepy family is back just in time for some Halloween spooks. MGM’s The Addams Family 2 will premiere both in theaters and on demand on Oct. 1. Until then, take a peek at what kooky new adventures await Morticia, Gomez, Wednesday, Pugsley, and Uncle Fester with Romper’s exclusive sneak peek into The Addams Family 2.

Designed as a sequel to The Addams Family animated film MGM released in 2019, this latest film sees the Addams clan hit the open road in search of a vacation capable of renewing the family’s once close-knit bond. In fact, co-director Conrad Vernon told Animation Magazine the vacation storyline within The Addams Family 2 will likely be one many parents can relate to.

“It comes from Gomez’s worry that he is losing touch with his kids,” Vernon said. “He feels they’re starting to drift away as they get older. They don’t hang out in the house anymore and they don’t show up for dinner.”

But when a stranger interrupts Gomez’s vacation claiming to have proof that he is Wednesday’s real father, the chasm between daughter and dad seems to grow cavernous and makes everyone question what really makes a family, family.

In a sneak peek shared exclusively with Romper, the cast of The Addams Family 2 attempts to answer just that. “What makes a family?” Nick Kroll, who voices Fester, asks in the clip. “Respecting boundaries.”

“Accepting you for who or what you are,” Oscar Isaac, who voices Gomez, chimes in.

Of course, Gomez’s road trip will also bring the Addams family into contact with more... well, normal people — something the first film explored when it placed a new planned suburban community just outside the gates to the Addams family home. “Audiences really like watching the Addamses get into different situations and conversations with what we call normies … normal people,” Vernon told Animation Magazine.

The Addams Family 2 will premiere in theaters and online on various on-demand streaming platforms on Oct. 1. Families looking to stream the movie at home can look for it on Amazon Video, Google, Play, YouTube and iTunes. According to Deadline, streaming rentals of The Addams Family 2 are expected to be priced at $19.99.