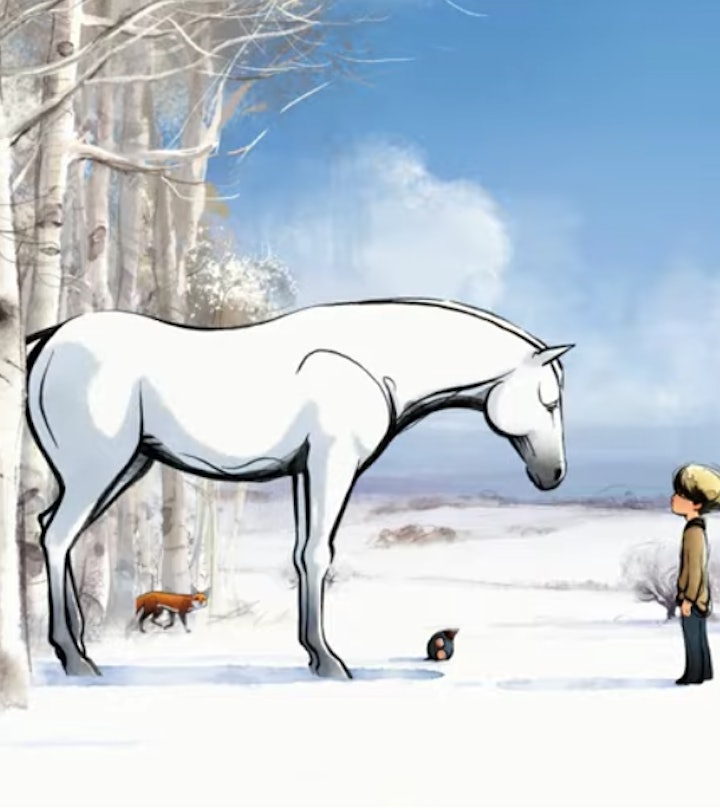 The Boy, The Mole, The Fox, and the Horse Animated Short Looks Absolutely Gorgeous

Mark your calendars for Dec. 25.

Apple TV+ has finally released the trailer for The Boy, The Mole, The Fox, and the Horse, the upcoming animated short film based on the internationally best-selling book of the same name. Featuring an all-star cast and lauded production team, the gorgeously animated cartoon tells the story of kindness, friendship, courage and hope in the Boy’s poignant search for home and will premiere globally on Dec. 25, Christmas Day, on Apple TV+. Kids will no doubt love the story of a child and his animal friends, but please be warned: you, an adult, will almost certainly cry. (We’ll cite that assertion by letting you know that we, too, cried.)

The characters in The Boy, the Mole, the Fox, and the Horse were created by Charlie Mackesy.

It all began in 2018 with a simple drawing of the Boy and the Mole simply sitting side by side, which the British artist posted to his Instagram account. As time wore on he added to their world — a Horse, a Fox — all in a simple but whimsical pen and ink drawing style and began adding evocative mantras, messages, and contextless but powerful dialogue ranging from simple things like “Don’t be afraid” or more profound “‘Asking for help isn’t giving up,’ said the horse, ‘It’s refusing to give up.’”

The Boy, the Mole, the Fox, and the Horse won book awards in the U.K. and U.S.

In 2019, he published The Boy, the Mole, the Fox, and the Horse, a loosely connected series of drawings and vignettes that follow the developing friendship between the four titular characters. The book was shortlisted for the 2020 British Book Awards Non-Fiction Lifestyle Book of the Year in 2020 and won the Barnes and Noble and Waterstones Book of the Year Awards in 2019. It has been compared to, among other classics, The Tao of Pooh and The Little Prince.

The Boy, the Mole, the Fox and the Horse cast and crew feature many familiar names.

The film features full-color, hand-drawn animation of Mackesy’s beloved characters with an all-star cast, on-screen and behind the scenes. Produced by Academy Award nominee Cara Speller along with Matthew Freud, J.J. Abrams and Hannah Minghella, The Boy, the Mole, the Fox, and the Horse features the voice talents of Tom Hollander (the Mole), Idris Elba (the Fox... naturally), Gabriel Byrne (the Horse), and newcomer Jude Coward Nicoll (the Boy). In addition to being available on Apple TV+ starting Dec. 25, the film is presented in partnership with the BBC, which will premiere the film in the UK.

Check out the trailer below...

...and, please remember: we warned you crying was a possibility.

The Boy, the Mole, the Fox, and the Horse will premiere on Apple TV+ on Christmas Day.

The Boy, the Mole, the Fox and the Horse will premiere on Apple TV+ on Dec. 25.

More Like This
Hey Fellas, 'Ted Lasso' Season 3 Is Coming Soon
Freeze! The Single From The New 'Bluey' Album Just Dropped
Exclusive: Watch How A Group Of Princesses Save The Day In Netflix's New Animated Series
Pixar’s 'Turning Red' Is Nominated For An Oscar — Here’s How To Watch It Right Now
What Parents Are Talking About — Delivered Straight To Your Inbox