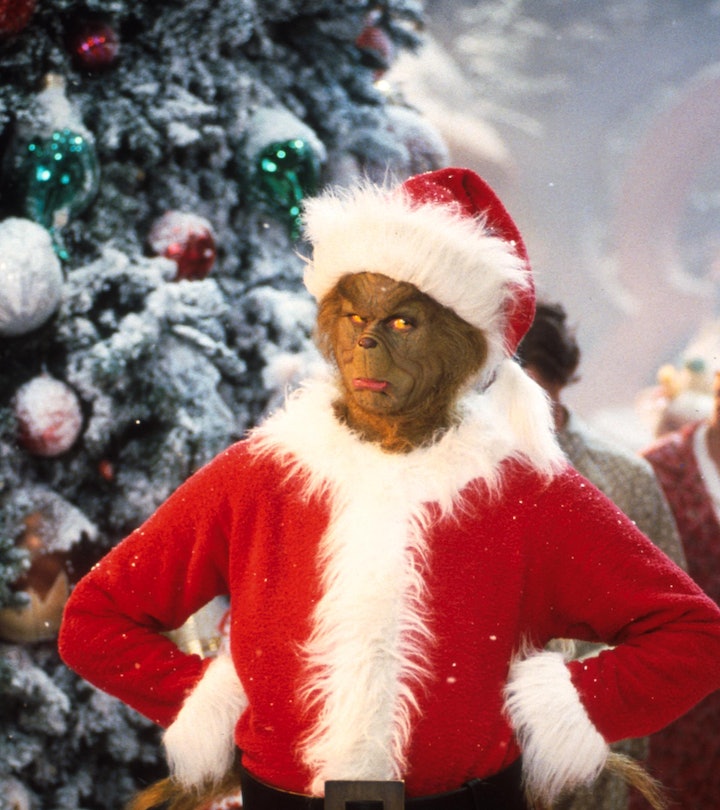 8 Life Lessons We Can All Learn From The Grinch

Of all the beloved Christmas classics out there, few have more staying power (or iterations) than Dr. Seuss’ How the Grinch Stole Christmas. But far from simply a feel-good holiday movie, there are important lessons from the Grinch that anyone can learn from...

Having quiet time is important.

The Grinch is well known for his hatred of noise — if there’s one thing he can’t stand it’s all the noise noise noise noise — and love of slothful, slovenly solitude. And you know what? We stan a fuzzy green king. Look, did he take it too far? Yes. That said, as a mother especially, I understand how it got to that point. Have you ever heard excited children blow their floofloovers and bang their tartookas really early in the morning? You’d be annoyed, too. You might even dream of cancelling Christmas so you can wallow in your gross sweatpants in perfect silence in a cave on a mountain by yourself.

You’re picturing it, aren’t you? You’re tempted, no?

Acting out is often a cry for help.

This live-action depiction of the Grinch gave the Scrooge-y villain-turned-hero a level of depth we haven’t seen in previous iterations. Dr. Seuss’ book and 1966 cartoon both featured a Grinch whose grumpiness or loathing for Christmas was a source of speculation (tight shoes? improperly screwed on head? heart too small?). Ron Howard’s Grinch is a tortured soul mocked by callous townsfolk for his myriad differences. His decision to isolate himself on Mount Crumpet wasn’t a whim: it came from a place of hurt and people, like Grinches, can be that way too. Granted, most of them don’t try to destroy Christmas but it’s a good reminder to offer compassion and kindness when you can.

Dogs are so good and we don’t deserve them.

I mean, really, look at Max, the ill-treated but ever-loyal pooch of the Grinch. Look at his sweet eyes. His noble bearing. His fwoppy woppy widdle eawrs. Look at the way the Grinch puts a reindeer horn on his head and Max just lets it happen. What a champ. What a very good boy. What a potent symbol of all dogs everywhere.

Look, did Max technically stand by and let the Grinch steal Christmas? Yes. But we don’t hold that against him because he was following his owner and he’s a dog. Besides, he tried to dissuade the Grinch whenever he could!

It’s normal to get anxious about social events.

Truly, there is no more relatable scene in the whole movie than the Grinch receiving a holiday invitation and toggling between excuses as to why he can’t go — from not having anything to wear to insisting he has no time between “wallowing in self pity” and “lay in bed, stare at the ceiling, and slip slowly into madness” to just haphazardly smashing things in frustration. Like, hello, it me, down to the Grinch-y mom-bod, though I am slightly less fuzzy.

Of course, in the end, all’s well that ends well between the Grinch and the Whos, but I think it bears mentioning that all that stress you feel about going out the door during the holidays (or, frankly, for any social event after you’ve already settled in for the evening and taken off your bra) is valid.

Even ugly babies are cute.

I won’t lie to you: I find the makeup and prosthetics in the live-action Grinch pretty unsettling. Like... what’s happening with the Whos faces and why? I don’t understand. And Jim Carrey has a rubber face without Grinch makeup, so with it things get pretty eerie pretty quickly.

But that Baby Grinch puppet, yo. Tell me you can’t imagine a world where Baby Grinch and Baby Yoda are buddies.

Like... it’s still creepy and unsettling. But somehow it went right through that to come out on the other side of cuteness. It's probably the enormous eyes. Even if a creature is otherwise scary, if it has big eyes it sort of tricks you into thinking it's adorable. Like an aye-aye. And it’s the same with human babies: some of them aren’t exactly “conventionally adorable,” but they’re still cute in their own, ugly baby sort of way!

Both spite and compassion are powerful motivators.

For a fairly short story, the Grinch really does get a tremendous amount of work done in one night. Not only does he completely ruin Christmas by himself (OK, with a little help from Max) but he also singlehandedly saves it! And in both cases he was powered by his emotions — seething, bitter spite and a sudden burst of compassion and love.

Now it’s the popular Christmas message that love is the most powerful force of all and that’s true! Nothing can move mountains (or giant sleighs full of an entire town’s stuff) like love... but also that spite got a lot accomplished, amiright? Like... we might be sleeping on the power of spite...

Shaving in the winter is a misguided mistake.

When the obnoxious Who boys and girls made fun of the Grinch’s fuzzy face, he caves to the pressure to conform by shaving and, being a child, it doesn’t go well...

But it really does teach us an important lesson, if we’re wise enough to pick up on it: don’t shave in the winter. Seriously, what’s even the point. Just let that soft layer of fur keep you warm in the cold months — if you want to shear yourself, do so in the spring when your body isn’t shrouded in layers.

After all, like the Grinch (I assume) we’re mammals, and mammals have hair, green or otherwise. Let’s just let it be, especially when it’s cold outside.

After the Grinch successfully steals Christmas (or so he thinks) he's bemused to discover that, actually, the Whos still gather and sing and, well, I'm not going to be able to say it any better than Dr. Seuss himself, so I'll let him tell it...

More Like This
Marcel The Shell Is Officially An Oscar-Nominated Movie Star
Watch An Exclusive Sneak Peek At 'The Amazing Maurice'
Marcel The Shell Is Heading To The Oscars!
Pixar’s 'Turning Red' Is Nominated For An Oscar — Here’s How To Watch It Right Now
What Parents Are Talking About — Delivered Straight To Your Inbox