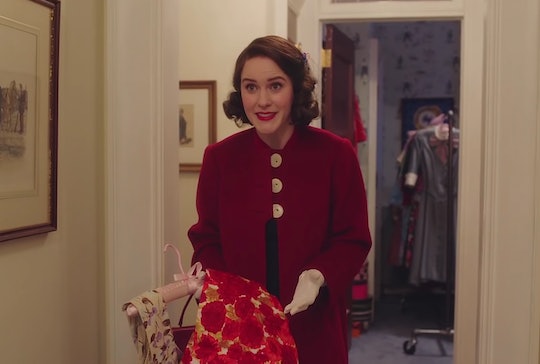 The Release Date For Season 4 Of The Marvelous Mrs. Maisel Is Finally Here!

Mark your calendars for February 2022!

After nearly two years of waiting, fans are finally some info about Season 4 of the Amazon Original series The Marvelous Mrs. Maisel. On Nov. 30, Amazon Prime has dropped an official teaser trailer for the show’s upcoming season, just a few weeks after Rachel Brosnahan shared the first look. But fans of the New York housewife-turned-stand-up-comic will, unfortunately, have to keep waiting a few more months to see Midge fully back in action.

On Tuesday, Amazon released the first of what is expected to be four teaser trailers for the upcoming season of The Marvelous Mrs. Maisel. While the trailer doesn’t reveal much — it’s a teaser after all — it does let fans know their favorite funny girl hasn’t given up on her standup career after the mess that was the Season 3 finale.

Earlier in the month, Brosnahan and Amazon Prime Video dropped two first-look photos from the upcoming season of The Marvelous Mrs. Maisel on Instagram. In the first, Brosnahan (who plays Miriam "Midge" Maisel in the series) can be seen lying down amidst a mountain of feathers, fringe, and sequins in what appears to be a showgirls’ dressing room. While Midge stares expressionless into the camera, girls in elaborate headdresses congregate behind her. In the second photo, Midge’s parents Abe and Rose (played by Tony Shalhoub and Marin Hinkle) sit behind two TV dinner trays while presumably watching television.

The end of Season 3 brought some tough developments for Midge. (Note: Some spoilers are ahead if you have not watched the first three seasons.) After cracking jokes about fictional singer Shy Baldwin and insinuating about his sexuality as part of her act, Midge found herself fired from the singer’s international tour and out of a job. But Midge’s firing is especially troublesome considering she’d used the job as collateral to buy an apartment.

The last season of The Marvelous Mrs. Maisel also saw Midge’s manager Susie Meyerson (played by Alex Borstein) gamble away all of her and Midge’s money. In a perhaps ill-thought-out attempt to set matters right, Susie burns down her childhood home in order to collect and pay back Midge with the home’s insurance money.

Viewers can expect to see new faces added to the Mrs. Maisel cast in season four. Kelly Bishop and Milo Ventimiglia of Gilmore Girls have both signed on to reunite with creator Amy Sherman-Palladino for the upcoming season, according to The Hollywood Reporter.

What Do We Know About Season 4’s Plot?

The short answer is not a whole lot. While Brosnahan has given fans a first look at the upcoming season of The Marvelous Mrs. Maisel — and Amazon has dropped a brief 50-second trailer — neither are exactly tell-alls, if you know what I mean. Of course, Midge and Susie will likely both have to face the consequences of their Season 3 actions in the next season. So it seems fairly reasonable to assume that viewers will get to see them grappling with how to pick up the pieces of their lives in Season 4.

But it seems as if Midge does eventually land a new gig, one Deadline claims gives her “total creative freedom.” It’s not completely smooth sailing, however, as the news outlet has reported Midge’s commitment to her comedy begins to drive a rift between her and her family and friends.

Daniel Palladino, the series’ executive producer previously told Glamour that he and Sherman-Palladino were “debating” where to take Midge’s story from the Season 3 finale and stressed the pair couldn’t “assure” fans of anything.

“We’re not here to make anybody feel good,” Sherman-Palladino told Glamour. Does this mean Midge will be moving back in with her parents? Or is a Midge-Suzie breakup on the horizon?

Did The Trailer Reveal Anything?

The first teaser trailer for the upcoming season sees Midge and Susie talking business over sandwiches at their favorite diner. “The past is behind us,” viewers see Susie tell Midge. “Shy who? F**k him. Moving forward we need a game plan.”

While the trailer doesn’t reveal what game plan the two ultimately come up with, it does show Midge making a bold (and probably risky) decision: No more opening act gigs. Instead, Midge declares she only wants to do gigs where she can say whatever she wants. When Susie attempts to explain that’s not how the business works, Midge utters a line that will likely prove to be a key theme for the show’s fourth season: “Then let’s change the business.”

Is There A Release Date For Season 4?

Yes! After much anticipation, Amazon Prime has announced that Season 4 of The Marvelous Mrs. Maisel will premiere on Feb. 18. But according to Deadline, Amazon Prime will be changing up how they release the show. Instead of dropping the entire season at once, as has been done in previous years, Amazon is expected to release two episodes every Friday for four weeks.

Could Season 4 Be The Show’s Last?

With so much change reported to be on the horizon for Midge, it’s not surprising that some fans have worried season 4 could bring about the end of the series. But insiders have said there’s no reason to be concerned (phew!). Amazon Studios head Jennifer Salke recently told Deadline there’s been no talk about the upcoming season being The Marvelous Mrs. Maisel’s last.

How To Watch The Marvelous Mrs. Maisel

The Marvelous Mrs. Maisel streams exclusively on Amazon Prime, meaning you’ll need an Amazon Prime account in order to watch the upcoming season as well as the first three.

This article was originally published on November 15, 2021