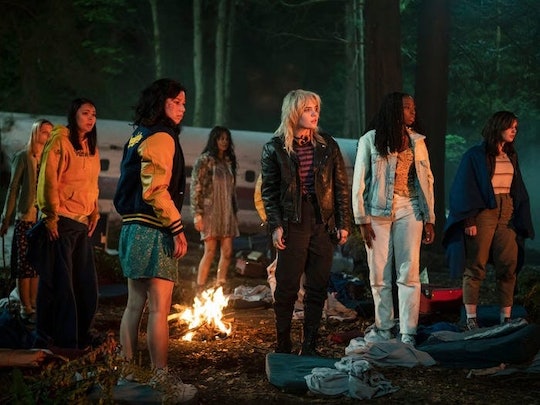 From The Wilds of Postpartum, I Recognized Myself In The Yellowjackets Teens

After I had my second daughter, I thought I had my postpartum binge show all lined up. I was looking forward to revisiting Friday Night Lights’ Panther country as I muddled through the overwhelming, draining months with a new baby. So I was surprised when it wasn’t everyone’s favorite mother/mentor Tami Taylor that I found myself most identifying with but instead the girls of the gender-swapped Lord of the Flies-revamp, Yellowjackets.

Yellowjackets, which recently wrapped up its first season, tells the story of what happened to a girls soccer team after their plane crashes. The action happens in two timelines; the first is set in 1996 and focuses on the immediate aftermath of the crash and the year-and-a-half that survivors spent in the wilderness. The second timeline, 25 years later, follows a small subset of survivors back in civilization, trying to navigate both the guilt and trauma of what they endured and the sudden emergence of sinister forces that seem intent on exposing their secrets.

Though it premiered in November, Yellowjackets grew in popularity over the season, with a plot that inspired endless fan theories, pitch-perfect ’90s nostalgia, and portrayals of teen characters as fully complex human beings, a depiction teens in general, and teen girls especially, rarely get.

After birth, I felt rocketed back into teendom.

Like many others, I squirmed and covered my eyes through the show’s more gruesome scenes — a justified response considering the pilot starts with the girls hunting, skinning, and tearing the flesh off another human to eat it — but I was able to see beyond the shock and horror of each episode and see something else in the survivors: a kinship almost. They struggled through adolescence as I struggled through new motherhood. I recognized both as times when my body and mind would be so irrevocably changed. I was struck not only by how deftly the show utilized the metaphor of wilderness survival for adolescence but also how well it worked for the transitional postpartum phase I found myself in, what psychiatrist Alexandra Sacks calls matrescence.

I’d come across the term during a series of frantic Google searches as I desperately tried to survive my first year of motherhood, trying to figure out what inside of me felt so off. I had taken the birthing classes and read the books. I was ready for sleepless nights and diapers blowouts and endless laundry. What I wasn’t prepared for was what was happening within me, this awkward second adolescence where it felt like my entire being had changed, was changing. Reading about matrescence, I finally felt the relief of recognition and understanding. No, matrescence told me, I wasn’t imagining these changes; they were truly happening, as real as puberty before it.

After birth, I felt rocketed back into teendom. The same parts of my body ached: the new heft of my breasts, my widened hips, even my joints, tightening back to normal after becoming wet-noodle loose to allow my baby to slip into the world, like the growing pains I’d felt all those years ago. And my emotions? I was more prepared for the intense hormone swings this second time around, but it’s fair to say that a stiff breeze could make me sob. Everything felt raw and exposed.

Post-birth, I felt this same sudden and swift connection to my own body, not only for its weaknesses but for its previously unrecognized strengths.

The blackmail, the kidnappings, and the supernatural prophecies kept me watching Yellowjackets each week, but I also recognized the changes in the girls themselves. As their time in the woods stretched longer and longer, they started to become more comfortable with their means of survival. They hunted and foraged; they killed and cooked. Many tapped into skills they didn’t know they had, reserves of power previously unnecessary were now tantamount to their survival. And as this happened, high school hierarchies disappeared, queen bees and wannabees (mostly) abandoned, friendship and empathy and acceptance were suddenly not just buzzwords but necessary to live. During this time of overwhelming change, the girls are stripped bare of outside forces, left with nothing to indulge in besides their bodies and bones.

Post-birth, I felt this same sudden and swift connection to my own body, not only for its weaknesses but for its previously unrecognized strengths: my new comfort with blood and how going to the bathroom felt less like changing a pad and more like tending to a gaping wound; the heat of my skin when I pressed my newborn against it to regulate her pounding heartbeat while she colic-cried for hours; the struggle to stay sane through the days of extreme boredom punctuated by wild exhilaration, typical of life with an infant.

And like the girls in Yellowjackets, I needed to find hope in the small things, like the day I’m able to watch her and her toddler sister without another adult to back me up. My version of survivors friendships were the ones I made, fast and fierce, with moms in playgroup, a recognition in the other mothers who have walked the same woods, survived the same wilderness.

Yellowjackets’ creators have called trauma a “big theme” of the show, speaking in interviews about how they wanted to explore the fact that trauma is something most people will experience in their lives, going as far as to call trauma a “fact of life… particularly for women.”

I saw this play out in the adult timeline, how the trauma of the woods imprinted on these girls as they became women, especially the two who became mothers.

In the pilot episode, suburban housewife Shauna, after fighting with her husband and teenage daughter, kills a rabbit who was eating her garden, skins it in her picture-perfect kitchen, and serves it for dinner, seemingly out of desire to test her survival instincts once again, to see if they remain intact when the trappings of everything else have failed her. And by the last episode of the season, we discover that ambitious Taissa is also unable to escape the grip of this time, reverting to the sleepwalking, hand-gnawing, and unconscious dirt-eating of her months in the woods, despite the years that have passed. Watching these women slip seamlessly, unconsciously, from their present, polished selves to their past, wild dopplegangers, I couldn’t help but think about the feral nature of the newborn stage, wondering what might be hardening in me this time around, what might stay with me, buried deep, even long after my daughters grew older.

We are constantly made and remade by what we’ve lived through, not building blocks to a new self but instead scrambled-up histories, puzzle pieces whose full picture can only be revealed at the very end.

It’s an interesting idea, the slipperiness of timelines and trauma, one that Yellowjackets enjoys playing with. In The New Yorker, Andrea Long Chu posits that the teen and adult timelines don’t necessarily take place one after the other, but rather “in the perpetual present.” We tend to crave the linear, and this is especially true in parenting, the want for a person to move logically forward from pregnant to birth to mother, leaving behind the traumas of each stage as they ascend to the next. Why else would we send out platitudes like Mom and baby are happy and healthy immediately following the catastrophic experience of labor? But, as Yellowjackets shows us, the compartmentalization of these things is impossible, what one does to survive becomes core to that person, called upon and revisited. They are no more capable of leaving it behind or forgetting it than they are of erasing a scar.

And maybe that’s where I’m really finding the odd comfort, seeing this snake-eating-itself idea of how we — girls, women, mothers — are constantly made and remade by what we’ve lived through, not building blocks to a new self but instead scrambled-up histories, puzzle pieces whose full picture can only be revealed at the very end.

Or, maybe in that postpartum haze, I just desperately wanted to see who the pit girl is.