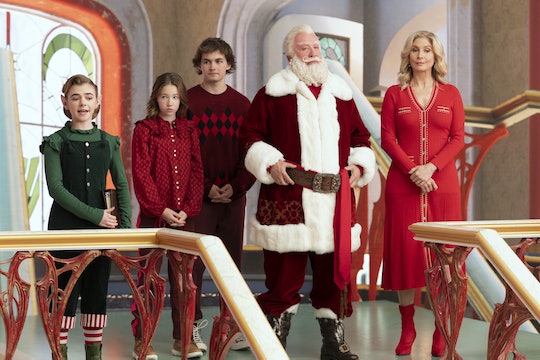 The Santa Clauses premieres on Disney+ on November 16.

The Christmas calendar seems to move ever so slightly earlier every year, a phenomenon that most people seem to instinctively distrust. But are they right to do so? A longer Christmas season means more holiday time with family, more time to shop for gifts (and take advantage of sales), and earlier releases for sequels and spin-offs of beloved Christmas movies.

That brings us to The Santa Clauses, a limited series inspired by the 1994 film and its sequels. The first two episodes arrive on Disney+ on November 16, more than a week before Thanksgiving. Tim Allen returns as Scott Calvin, the businessman who unwittingly took on the title of Santa Claus. Millennials who watched the original film when it came out will enjoy the nostalgia trip while their kids will enjoy a wholesome Christmas tale.

In the original film, becoming Santa eventually helped Scott appreciate what’s important in life and grow closer to his young son Charlie. But after nearly three decades in the suit, he is at a point in his life where the vitally important, massive obligation that comes with the territory is a barrier that prevents him from giving his family the time and attention they deserve. Plus, it’s his first chance since taking on the job to enjoy a non-working Christmas with his family — and as a clean-shaven guy, to boot.

That begs a very big question: Who will become the new Santa? Peyton Manning gives a hilarious interview for the job, but Calvin ultimately picks a different, worse applicant, igniting a precipitous drop in Christmas spirit that puts the very existence of the holiday (and the elves who make the North Pole hum) at risk.

So instead of getting his first Christmas off in years, Calvin ends up working harder than he ever has to save the holiday and his legacy — all with the help of his family.