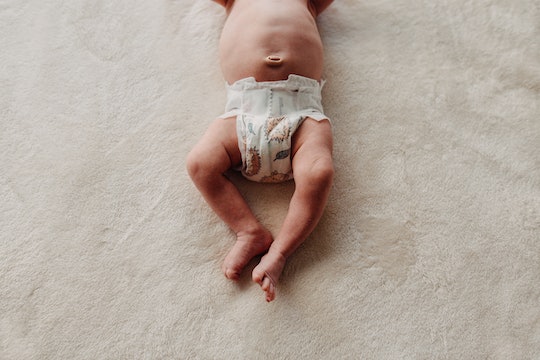 "All my FB mom groups are on fire. It is CRAZY."

If you're a parent in any kind of online space, you've probably seen people talking about "Taking Cara Babies." Lately, however, its founder has found herself at the center of a debate about where people wish to draw their line in the sand regarding politics. But what exactly is the Taking Cara Babies controversy parents are talking about and why are some people angry? It involves former President Donald Trump, so let's unpack what happened.

What Is Taking Cara Babies?

Taking Cara Babies is a company created in 2013 by neonatal nurse and mom of four Cara Dumaplin. According to her online bio, she uses "the science of a nurse and the heart of a mama" to teach parents and caregivers how to help their children, from newborns to 24 months, get to sleep.

The Taking Cara Babies courses, which include video instruction and manuals, sell for between $79 and $319, depending on the product. Much of the company's popularity, however, stems from Dumaplin's Instagram account — @takingcarababies — which boasts 1.3 million followers. The name has become somewhat of a shibboleth among sleep-deprived millennial moms, and has been featured by nationally recognized outlets like Good Morning America and Parents.

Though the origin of this discovery remains murky, it was widely publicized in the Instagram stories (and later in a post) of another parenting influencer, Jamie Grayson, founder of The Baby Guy Gear Guide website who's been featured in The New York Times, The Los Angeles Times, and on The Today Show, among many others. "When a few people tagged me in a thread about another parenting expert from the Internet, I took notice," he said in a post. "You cannot take cara babies if the person you’re supporting puts them in cages. Full stop."

The Response Has Been Heated

"All my FB mom groups are on fire," New York Times tech writer Sheera Frenkel tweeted on Jan. 21. "It is CRAZY."

Indeed, from private Facebook groups to Twitter and Instagram, social media has been abuzz with the news... though the reaction to this revelation is, like basically anything else involving politics, fairly split. Many are outraged and feel betrayed that someone they supported, financially and otherwise, would contribute to a cause they see as being antithetical to moms and babies.

"I cannot express the massive disappointment I have that I gave so many referrals and so many hundreds of dollars to #TakingCaraBabies," @hannstarr tweeted. "Cara, I love you, but you are replaceable. There is no room in my life (or my baby's!) for supporting hatred."

"I'm so so so disappointed of Taking Cara Babies I've bought all her sleep courses. I saw her as a superhuman," Twitter user @kontowhat wrote.

"Someone needs to get her thoughts on the best way to sleep train babies in cages," professional poker player Vanessa Selbst tweeted, "and particularly how to adapt strategies for when they were ripped from their parents."

Indeed many responses have been cynically snarky, juxtaposing Dumaplin's sleep advice with Trump's various policies and stances. A roundup of responses from Twitter user @TheMermaidAG features satirical questions posed to Dumaplin. "Hey, my toddler's sleep pattern got so disturbed for the two months he was in a cage with 45 other kids sleeping on the floor with a foil blanket. What do you suggest?" "Can you go over the ABC's of fascism again?" asks another, a reference to the Taking Cara Babies program ABC's of Sleep. "Is there an index?"

And yet others support Dumaplin. "She is a wonderful woman I know personally," tweeted @kyndridd, "and if anyone takes time to post hate against a wonderful company she has built from the ground up- that’s pathetic! Praying for all the haters."

"She's great at what she does," The View producer Daniella Greenbaum Davis tweeted. "People can do as they pls but picking sleep training experts based on political affiliation is nuts."

In a statement to Romper, Dumaplin addressed the conversation circulating on social media. "My business is about helping babies get sleep and parents reclaiming the joy of parenthood that’s often lost due to sleep deprivation. And for me, that means all parents — no matter who they are, what they believe, who they love, the color of their skin, where they were born, or who they voted for," she said. "When your baby is up in the middle of the night and you’re exhausted, that’s the most important thing in your world — not who is in the White House. For me, helping babies sleep is more important than debating politics."

Previously, Dumaplin had issued another statement to BuzzFeed News reporter Stephanie McNeal, acknowledging she made $1,078 in contributions. "As with many citizens, there were aspects of the Trump Administration that I agreed with and some that I disagreed with," her statement read. "I will continue to serve all parents by empowering them with the tools they need to help their babies sleep."

According to BuzzFeed News, one of Dumaplin's former collaborators on Instagram, @BigLittleFeelings, commented on the donations and made the decision to unfollow the Taking Cara Babies account. Another collaborator, @feedinglittles, issued a less reproachful statement. "We don’t really know what to do or say. We love our friend. That’s all we are going to say." But among the broader public, with detractors and supporters making their voices known, it's unclear whether this will affect Taking Cara Babies' bottom line.

Since the news broke on Wednesday, Dumaplin's Instagram account has retained more than a million followers. And yet while some continue to recommend her program with no mention of politics, for many, uncomfortable with the idea that their money could indirectly support causes and candidates in opposition to their values, the damage has been done. "Ok parent twitter," @LauraLChan tweeted, "now that taking cara babies is no longer an option, what classes do I need in my life?"

Editor's Note: This article has been updated to include Cara Dumaplin's statement to Romper.