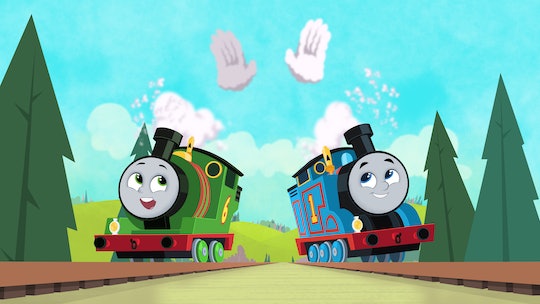 Choo Choo! Your Kids Are Gonna Love This Exclusive Peek At Thomas & Friends: All Engines Go

Thomas & Friends: All Engines Go is essentially a reboot of the classic Thomas & Friends TV series, although Thomas the Tank Engine is expected to be younger in the new show than he was in the original. “Thomas will be center stage and we will see the world through his young eyes,” a press release for the show teased. “More playful and relatable than ever before, his competitive spirit will be readily apparent as he strives to be the Number One Tank Engine through play, trial and error, and just enjoying being a kid.”

Take a peek at Thomas and some of his friends in Romper’s exclusive clip, which sees the young tank engine scramble to recover his escaped train cars before they crash into another train.

Like the original series, Thomas & Friends: All Engines Go will see Thomas and his friends Nia, Percy, Diesel, and Kana as they work and play along the railways of where they live on the Island of Sodor. Each episode will center around a specific theme, such as facing one’s fears, learning to be resourceful, or realizing that you don’t always have to solve problems alone.

Catch Thomas & Friends: All Engines Go when it debuts Sept. 13 on Cartoon Network’s Cartoonito block between 6 a.m. and 2 p.m. ET/PT. New episodes will premiere every Monday following the show’s debut.