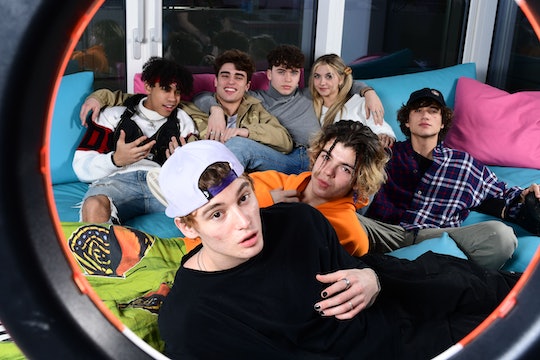 And your "😂" isn't doing you any favors either.

I always knew this day would come: I'm old. I know I'm old because because TikTok teens think side parts and skinny jeans look old. Skinny jeans! Side parts! My generation's style choices are outdated and something to laugh at. (But not 😂 kind of laughing, because that emoji apparently makes you look old, too.) *Sigh.* I thought after I graduated high school, my days of being made fun of by teenagers were over, but actually I only got about 15-20 years. It was a good run. Now the children are back at it, and they're just as vicious as I remembered.

It's OK. Fashion and culture are always in flux: the old must make way for the new, which often exists as a reaction to the old. And then, apparently the new must assert its dominance by viciously mocking the old until we cry. (What did we ever do to you, Addysen and Jayden?!) This is basic Circle of Life stuff and we Millennials are like Mufasa: cruelly betrayed and hurled into a gorge to be trampled by Gen-Z wildebeests who can't even be bothered to cast a glance our way as we suffer beneath their pointy little hooves. (Do teens even get that reference or is The Lion King stupid now, too?)

Yes, the teens are out there, gleefully mocking their elders. Like this girl who chose "dying in the next 30 seconds" over wearing skinny jeans...

And this girl in skinny jeans who magically becomes "swag" when she wears baggy jeans...

Or this girl, who demonstrates that Millennials take selfies at angles that strike Gen Z as weird:

Ummm.... seriously, taking a selfie at an upward angle? In the words of my generation "lolwut?"

But we Millennials have been through a lot and we can take it. We survived our high school boyfriend breaking up with us on AIM (look it up, youths). We survived low-rise jeans with some dignity in tact despite the fact that the world was looking at our buttcracks through the early 2000s. Half of us lost half our eyebrows through over-tweezing in the '90s and we're still standing (our actual eyebrows: not always so lucky). And we're old enough and wise enough to have a laugh about the foibles and fashion faux pas of our halcyon days: mean teens cannot possibly match our self-deprecating sense of humor.

So it's not surprising that so many of my 26-40 year old Millennial siblings have taken to TikTok (yes, we know how to operate TikTok!) to express their horror (or crack a joke).

"Call me grandma!" @.theresa.jones writes over a video of her running dramatically along with the text, "When you find out you have to get rid of your side part and skinny jeans and can't use [a crying with laughter emoji] anymore bc it means you are old."

Millennial TikTok user @speedforcecosplay had an existential crisis upon learning side-parts were out. "Is this why I'm not getting carded anymore when I go to pick up beer?" she asks, gesturing to her hair. "Why did no one tell me?!"

TikTok user @lesby.onix had a dramatic meltdown to discovering that the "laughing so hard you're crying" emoji is passé.

After learning side parts are uncool, @sra_krod gave a middle part a try. "You're not going to tell me this is better, because I had this. ... No! Middle parts are stupid! I want volume!"

Some did not let the whippersnappers off light.

"I'm sorry," says @taylorrainmusic, "but the generation that ate Tide Pods does not get a say in where the part in my hair goes or what pants I wear. Thanks."

But, ultimately, I'm going to have to say that it was @keeeeeeeks77 who really nailed it.

"The only reason that Gen Z hates on skinny jeans is cuz they're too young to have FUPAs yet... or hips," she says. "They'll get it eventually."

Look. It would be very easy to hurl insults back. Like, if I laughed at the children who think they invented baggy jeans and middle parts (we did that in the '90s, little ones: we outgrew it). Or if I rolled my eyes at them badly lip synching other people's jokes and posting it on the internet for the world to see. (Cool!) Or ask them to report back on how their "mom jeans" look after they've actually borne a child. But I won't do that. Because I'm a mature adult, and I wish them well.

By all means means, have fun, Gen Z... while you can. Because by my calculations you have approximately 15 years before you, too, get viciously torn apart by teens and their Very Cool opinions.

More Like This
The Morning Rush Is Parenting At Its Most Essential
Which Type Of Back To School Mom Are You?
Doja Cat’s Shaved Head Is Teaching Black Kids Hair Love
14 Perfectly Pretty Floral Nail Designs