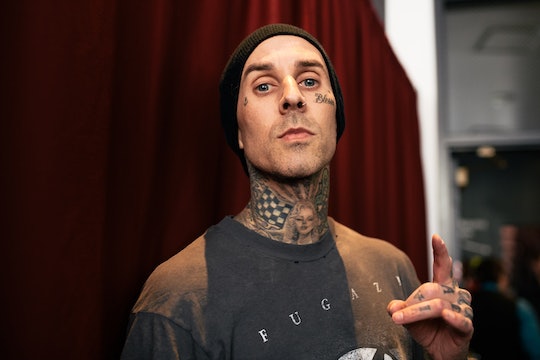 For Travis Barker, No Accomplishment Can Top Fatherhood

“I love being a dad. It's better than any song I've ever made or any accomplishment I've ever had or I've done.”

In the 25 years that Travis Barker has been making music, he’s had 14 songs land within the Top 10 of the Billboard Hot 100, established his own record labels and clothing line, starred in his own reality TV show, and more. Much more. And yet, for the Blink-182 drummer, there’s one accomplishment that stands above all others: Fatherhood. In an interview with Nylon, Barker said nothing compares to being a dad.

“I love being a dad,” Barker recently told Nylon. “I always say that’s my best ... it’s better than any song I’ve ever made or any accomplishment I’ve ever had or I’ve done. I feel like being a dad, just nothing compares.”

The musician, songwriter, record producer, and all-around pop-punk icon shares two children — 17-year-old Landon Asher and 15-year-old Alabama Luella — with his ex Shanna Lynn Moakler, whom he officially divorced in 2008, three years after Alabama was born. While Barker and Moakler have had a number of ugly public child custody disputes since then, Barker has maintained his children are his top priority.

But Landon and Alabama aren’t the only kids Barker has been spending time with lately. Since sparking a romantic relationship with longtime friend and fellow ex-reality TV star Kourtney Kardashian sometime in late 2020, Barker has been bonding with the Keeping Up With the Kardashians star’s three children, whom she shares with ex Scott Disick. In May, Barker shared a video clip of him and Kardashian’s 6-year-old son Reign sliding down a waterslide together during a backyard hang to Instagram. And it seems as if Barker and 9-year-old Penelope have found a common interest: drums.

Barker told Nylon’s Alyssa Vingan that whenever Penelope visits him in his studio, she finds her way to his drum kit. “You can’t be pushy, but you’re like, ‘Oh, do you want to learn to play something?’” Barker said about his attempts to encouraging the child’s creative exploration in music. “And she’s always bright-eyed and like, ‘Yes, I’m so excited to learn how to play.’ She caught on really quick, like super quick.”

To further encourage Penelope’s potential future career as a drummer, Barker and Kardashian gifted her a custom pink drum kit, complete with her own name scrawled across the bass drum. But of course, the gift wouldn’t be complete without drum lessons from Barker himself, although the musician told Nylon he isn’t insisting Penelope commit to a rigorous schedule of lessons.

“Not weekly,” he said. “[Not] like, ‘OK, Penelope, we have to do lessons today.’ But when she wants to learn then or learn something new I like being there to fill that little space, that creative space in her head.”

But while Barker is adamant that no accolade or career accomplishment can top fatherhood, he noted the time he spends with his children and with Kardashian has ultimately enriched what he creates in his music studio. “Spending time with my kids is so important,” he told Nylon. “And spending time with someone I love is so important. And just both those things make being creative and making music so much better.”