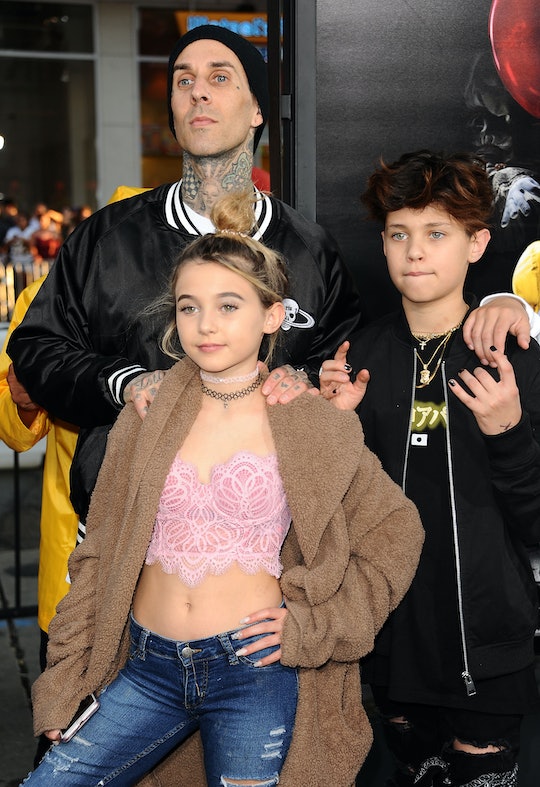 Alabama Barker used her dad to show off her savvy makeup skills.

Although just 15, Alabama Barker is proving she knows a thing or two about makeup — and she’s enlisted her dad in helping her show off those skills. Travis Barker’s teenage daughter gave him a makeover, using a viral product to completely cover famous rocker’s face tattoos.

“My dad let me give him a makeover,” Alabama wrote when sharing a video of herself applying a KVD Beauty foundation on her dad. “Covered up his face tattoos with @kvdbeauty’s new Good Apple Foundation. The coverage of this formula had us both shocked.”

As Alabama begins to blend out the foundation to cover a tattoo of the word “Blessed” that her father has under his left eye, the pair begin chatting about Barker’s tattoos. The heavily-inked rocker tells his daughter he got his first tattoo on his leg but that his favorite tattoo is the “Blessed” tattoo she just covered with makeup. Oops.

Thankfully, Barker’s a good sport and Alabama moves on to covering her dad’s other face tattoo, which she first misidentifies as a handkerchief.

Handkerchief or anchor, the tattoo becomes invisible with just one layer of the KVD Beauty’s latest foundation. While Barker doesn’t look like a completely different person in the before and after photos Alabama shared, the transformation is still fun proof of the foundation’s impressive coverage.

Alabama is Barker’s youngest child with his ex Shanna Moakler. The pair also have a son, Landon Barker, who was born in 2003, and Barker maintains a close relationship with Moakler’s eldest daughter, whom she shares with Oscar De La Hoya.

And while “dad” may not be a role that some associate with famous rock stars, it’s one Barker appears to love. He previously told People that losing his own mother at the age of 16 had made him prioritize taking an active and hands-on role with his kids. “My mom died when I was 16,” he told the magazine in 2008. “I had a rough childhood, you know what I mean? But it made me strong... I want a certain thing for my children. I just want to be in their life. I don’t want nannies raising my kids.”