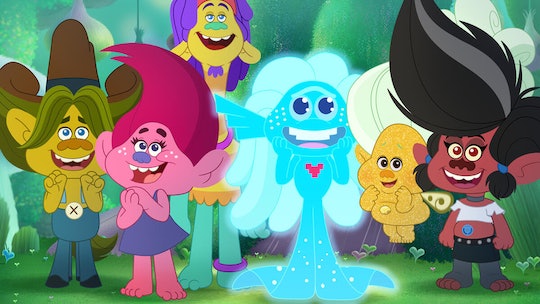 When Poppy discovered six new musical troll tribes in Trolls World Tour earlier this year, it opened the doors to a whole new world of harmonies and friendships. The next chapter of hair-raising hijinks will continue when DreamWorks' TrollsTopia premieres on Peacock and Hulu on Nov. 19.

In this new series, Poppy, armed with her dulcet voice and trademark positivity, invites delegates from the tribes throughout the forest — representing funk, country, techno, classical, pop, and rock music — to live together in a grand experiment she calls (what else?) TrollsTopia! Featuring the voice talents of Amanda Leighton, Skylar Astin, Kenan Thompson (Saturday Night Live), Jeanine Mason (Grey’s Anatomy, Roswell), Kevin Michael Richardson (Trolls World Tour, American Dad), the series will deliver all the belly laughs and earworms we've come to expect from the Trolls franchise. And with characters from all six villages making appearances, you know you're going to get a good musical variety sprinkled in there as well!

In this exclusive preview shared with Romper, you'll see Queen Poppy teaching a cadre of classical music trolls something that hadn't quite figured out on their own — the fun of hugging (through song, natch). And it goes great! These small, smartly coiffed classical-loving cuties are super into it... unfortunately they're just really, really awkward huggers. (Whomst among us doesn't know at least one, seriously?)

Honestly it's pretty hilarious. And the song will be stuck in my head, no joke, for days.

All 13 brand-new episodes (most featuring two stories apiece) will be available starting Nov. 19. So congratulations: you now know how your children will be spending Thanksgiving break!