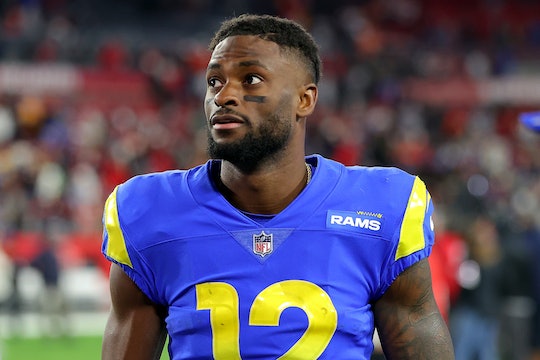 The NFL star literally rushed out of the stadium to meet his newborn son as his wife went into labor mid-Super Bowl.

Winning the Super Bowl, like welcoming a child into the world, is an unforgettable experience. And if you’re Van Jefferson, wide receiver for the Los Angeles Rams, you get both of those experiences in one day! Though his wife, Samaria Jefferson, told The Athletic she was due on Feb. 17, babies notoriously do not have calendars in utero; she went into labor during the game and had to be carried out of SoFi Stadium on a stretcher, the Rams confirmed. Within hours of winning agains the Cincinnati Bengals 23 to 20, Van was holding his newborn in a sweet picture posted on his Instagram stories.

The baby, whose name has not yet been announced, is the couples second child and joins big sister Bella, 5.

The Jeffersons have not yet said whether Van made it in time to see the birth of his son, but Samaria told The Athletic that while she would “stay calm and pray to God [her] water doesn’t break,” until after a win, she had made peace with the possibility that her husband and high school sweetheart would be too preoccupied to join her in Labor and Delivery. She even instructed her family and Rams’ support staff not to tell Van if she were in labor during the big game.

“He is going to play. He is going to keep playing,” she said. “I said, ‘You play, I'll see you at the hospital afterwards.’ That's what it is. I will never take that moment away from him.” (For what it’s worth, Van wanted to be told.)

But family is clearly a point of pride and joy for Van, who recently took time away from Super Bowl preparations to take his daughter to her first Daddy-Daughter dance. “It’s their first one,” Samaria told The Athletic, “and he was like, ‘I’m not missing it. I don’t care that it’s two days before the Super Bowl. I’m going to be there, I’m going to be there for her. I have to show up for her.’”

(And, clearly, no harm came of that!)

“I love being a dad, and being a dad makes it all worth it,” Van told the Williamson Herald. “Playing professional football, you miss out on a lot of things, but being able to go to my daughter’s event like that, I’m really, really excited.”

Of that one very special Sunday, Van shared his happiness on Instagram live. “It was a great day, bro,” he said. “I got three prizes today -- my wife, my son and the Super Bowl.”