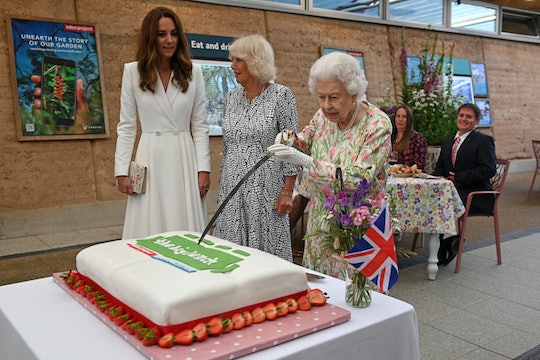 Queen Elizabeth Cuts Cake Like A True Royal — With A Sword!

England’s 95-year-old monarch wasn’t going to pass up the opportunity to cut a cake with a sword.

After nearly 70 years on the British throne, Queen Elizabeth II is proving she still knows how to surprise people. The royal monarch insisted on cutting a celebratory sheet cake with a sword on Friday, during a luncheon in Cornwall, England. Video of the hilarious moment, which includes the queen pointedly turning down offers of a more traditional cake-cutting instrument, has since gone viral, delighting folks across the internet.

When asked to cut a celebratory cake during an event celebrating The Eden Project’s Big Lunch initiative on the sidelines of the G7 Summit, Queen Elizabeth turned down offers of a knife. Instead, The Independent reported she asked to borrow a sword belonging to the Lord-Lieutenant of Cornwall Edward Bolitho.

“I know there is,” the queen replied when staff reminded her that a knife was available. “This is more unusual.”

Unusual is right. While the queen appeared to struggle slightly with maneuvering the curved sword all the way through the cake’s thick icing, a bit of assistance from Camilla, Duchess of Cornwall, enabled the monarch to get the job done. After the ceremonial first cut had been made, the queen returned the sword to the Lord-Lieutenant of Cornwall and used a large knife to finish slicing up the cake.

Camilla and Kate Middleton, the Duchess of Cambridge, both joined the queen in recognizing Eden Project’s Big Lunch volunteers on the sidelines of the G7 Summit in Cornwall on Friday. The initiative, which seeks to help people cultivate community connections through the organizing and hosting of neighborhood lunches, has been recognized for encouraging friendship and connection despite the challenges of the coronavirus pandemic. According to Buckingham Palace, Big Lunch volunteers are also organizing a Platinum Jubilee celebration in honor of the 70th anniversary of Queen Elizabeth’s reign next year.

Of course, the queen’s sword skills shouldn’t come as a complete surprise. The 95-year-old monarch has had a wealth of experience wielding a blade as she has knighted hundreds of people in ceremonies that involve touching a sword to the shoulders of the knighted individual.

What’s more, the queen’s sword cutting wasn’t the only time the monarch’s playful sense of humor was on display over the weekend. She joked with fellow G7 leaders while posing for the summit’s traditional “family photo.”

"Are you supposed to be looking as if you're enjoying yourselves?" she quipped, eliciting laughs from U.K. Prime Minister Boris Johnson, President Joe Biden, Canadian Prime Minister Justin Trudeau, and others.