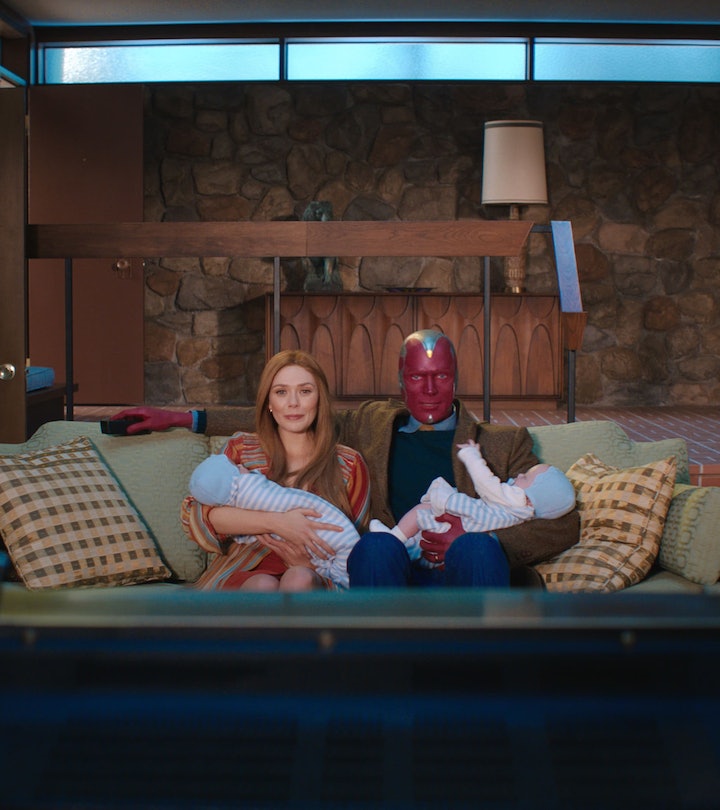 WandaVision: A Superhero Show About The Lie Mothers Tell Themselves Every Day

From the couch where my own kids spill a cumulative gallon of juice a day, I watched Wanda play out my worst nightmare as a mother.

The second I saw the baby bump, I knew things wouldn’t end well.

This was in episode two of 2021’s biggest TV show to date: WandaVision. If you haven’t watched, the series stars Elizabeth Olsen and was billed as “a blend of classic television and the Marvel Cinematic Universe.” I know a lot more about the former than the latter. I’m one of those people who only watches superhero stuff when it feels like a cultural moment. WandaVision, with its echoes of The Truman Show and mysterious conceit, easily qualified for my shameless bandwagon jumping.

But I got anxious when I realized that Wanda and the...red metal guy? (Sorry, I mean, Vision, who’s basically a computer-man — please don’t @ me for oversimplifying), were getting a pregnancy storyline. Babies? In a superhero series? How was that going to work? Superhero Dads are better fathers for leaving home to save lives, but new mothers would never get that kind of leeway, even powerfully witchy telekinetics.

Even in TV shows where no one has to protect the universe, infants are usually whisked offscreen after being delivered (and delivering ratings). How would a Marvel show balancing volumes of backstory, high concepts, and superhero clashes deal with parenthood, too? And wouldn’t bringing a kid into the arena up the stakes in dangerous ways?

It becomes, unexpectedly, a show where the deepest, darkest fears of motherhood come true — and a meditation on how our brains cope with the risks built into the job.

But instead of shying away from those stakes — instead of sending twins Tommy and Billy off to prep school, or a neverending soccer camp — WandaVision leans in. It becomes, unexpectedly, a show where the deepest, darkest fears of motherhood come true, and a meditation on how our brains cope with the risks built into the job.

At first, the issues the twins present are of the standard can’t-have-it-all flavor. Wanda wears dumpy sweatpants and needs a break. Her ponytail is frazzled. She is trying to balance raising twins with maintaining something called the Hex, a spell she cast over the entire town of Westfield, New Jersey. She’s turned Westfield into an alternate dimension where Vision comes back to life and serves as a Ward Cleaver to her June. The town is sealed off by a striated reddish barrier, one that show creator Jac Schaeffer says was meant to resemble a placenta.

“You're supposed to be a myth,” Agatha spits at Wanda, “a being capable of spontaneous creation—and here you are, using it to make breakfast for dinner.”

Things quickly get real when Wanda begins to have run-ins with her adversaries. It only takes one battle to see why Captain America isn’t a stay-at-home dad. When Wanda flits across the sky to deal with a threat, she must be as quick as I have to be when I step out to pee and my daughter has a clear shot at the kitchen cabinets. Tommy and Billy — who are tweens for most of the series — don’t have a nanny. They’re just hanging out in the yard. And when mom’s not home, bad guys make a beeline for them. One villain tries to shoot them at point blank range.

In another painful sequence, witch-next-door Agatha Harkness takes the twins hostage. First, she tortures Wanda with audio of them screaming, “Help me, Mom!” Then, she restrains them by the neck, using cords of purple magic. (I’ll pause here to let you gasp through your teeth, the way one does, with things around kids’ necks.) The scene is difficult even before Agatha tops it all off with a stay-at-home-mom burn: “You're supposed to be a myth,” she spits at Wanda, “a being capable of spontaneous creation—and here you are, using it to make breakfast for dinner.”

The toughest kid stuff in WandaVision isn’t the violence, though. It’s the times, as the season wears on, that the boys begin to disintegrate. Whenever there’s a threat to Wanda’s Hex, her husband and kids start to flake and disappear, granule by granule. Most of the time, Wanda vanquishes the enemy, and stops them from fully dissolving. But each time this happens, we’re reminded: her children aren’t permanent. At some point, she will have to say goodbye to them.

They wouldn’t show us these adorable boys all this time, and then just off them, would they?

Or will she? As the series wound toward its finale, I reassured myself with prior sitcom experience. They wouldn’t show us these adorable boys all this time, and then just off them, would they? That’s a classic TV no-no, killing the protagonist’s kids. And don’t superhero stories make a habit of pulling happy endings through half-explained loopholes?

In the finale, Wanda is faced with a choice: Should she keep defending her giant sky placenta, preserving her family and her happiness, even though it’s all fake? Or should she face her grief, and free the hostage extras in her show?

Wanda is a superhero; she sacrifices her own desires to help people, so it has to be the second one. In their final scene as a family — after she knows she must destroy the Hex — Wanda and Vision tuck Tommy and Billy in. It is an agonizing bedtime. She knows it’s the last time she’ll ever see her sons, but the boys are drowsily ignorant. And because Wanda is a mother, not just a superhero, she makes sure her face betrays nothing. All she allows herself are these parting words: “Boys, thanks for choosing me to be your mom.”

It’s an ending that’s both outrageously sad and spectacularly authentic. It says: We put motherhood in a place it doesn’t historically belong, and we saw it through.

Minutes after lights-out, Wanda’s family is no more. It’s an ending that’s both outrageously sad and spectacularly authentic. It says: We put motherhood in a place it doesn’t historically belong, and we saw it through. WandaVision exists now as a roadmap on how to square motherhood with the superhero story, which adds some diversity of experience to a genre that still needs all kinds.

I’m here to testify that more accessible characters and bold, all-in themes can do that. (It’s worth noting that WandaVision hits the motherhood stuff on other levels, too; both Wanda and her semi-rival Monica Rambeau are grieving their own moms.) I’ll be more than a bandwagon fan, from now on, when it comes to all things Wanda. And if more films and shows follow its playbook, I might become a certified stan. (Are we still saying stan? Sorry, I’ve been homeschooling for eons.)

Watching WandaVision didn’t just make me think of what might be in the future, though. It brought me back, powerfully, to something from my past. I remembered the painful squeeze I’d get in my heart, as a kid, whenever a hero’s parents died in a Disney movie. (I still leave the room when I see wildebeest starting to gather in The Lion King.) I read a theory once that the trope is there to articulate a child’s worst nightmare: their parents, gone forever. And then they get to see a character survive it.

After finishing WandaVision, I felt like I’d just been through the bookend to that experience. Wanda hears her sons cry for help and ultimately cannot reach them. She does everything she can to keep them but must eventually let them go. From the couch where my own kids spill a cumulative gallon of juice a day, I watched Wanda play out my worst nightmare as a mother. Then I watched her survive it. And I realized that I — that all of us, maybe — have had Hexes of our own, all along. This role would be untenable if we didn’t.

The delusion that keeps us going looks a lot like the one Wanda lived inside. It’s a world in which we can control everything that happens to our kids. A place where we have the power to make everything all right.

WandaVision is available for streaming on DisneyPlus.