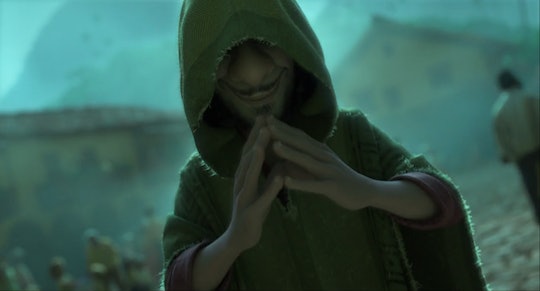 Ironically, "We Don't Talk About Bruno" From Encanto Is All We Want To Talk About

Once again proving that the “villains” always get the best songs

We knew when we heard that Lin-Manuel Miranda was writing the music for Encanto, Disney’s new animated film set in Colombia, we understood that, if nothing else, the soundtrack would slap. And slap it does, friends. From the soulful “Waiting On A Miracle” to the deeply resonant “Surface Pressure” (what mom doesn’t get Luisa?), every song is a bop... but there’s one that stands out. One that, above all others, has delightfully ear-wormed into our brains and lived there rent-free since we watched the movie with our kids over holiday break: “We Don’t Talk About Bruno” from Encanto is, ironically, all we want to talk about. In fact, as of press time it is the #1 song on Spotify in the U.S. and in the Top 20 on the streaming service internationally.

So for those of you whose children haven’t watched Encanto 700 times since Christmas, a quick explainer. The movie is about the Madrigal family — the family matriarch and her adult triplet children, and their spouses and children — all living in a sentient house that simply sprung out of the Earth when they needed it the most (an event referred to as “The Miracle.”) Like the house, each member of the family has a special “gift.” One can shape-shift, another heals any ailment with her cooking, one is super-strong, another makes plants grow. The only family member of the family without magical powers is our protagonist, Mirabel, who strives to make up for her lack of “specialness” with a sunny disposition and over-eager desire to be useful. But, for the purposes of this song, we need to talk about Bruno.

Bruno, one of the triplets, is the black sheep of the family who just sort of disappeared one day a few years ago after an unclear falling out (but everyone sort of knows it had to do with Mirabel). His gift was that of prophecy and, as any lit major knows, prophets rarely have an easy go of things. Sure it’s great when they tell you something you want to hear, but when it’s bad news? Well, it’s easier to demonize the bearer of that news than accept it.

“We Don’t Talk About Bruno” involves various members of the family sharing their remembrances of the estranged uncle — his various prophecies, his strange attributes. He’s a figure who becomes larger and larger (at one point described as having a “seven foot frame”) in the remembering and retelling (even though most of the prophecies mentioned are pretty benign). But that music?

“I do not know where the song ends and I begin,” tweets Dani Fernandez. “I am scared. Am I Bruno? I am the Bruno.”

“My New Year’s wish is to get “We Don’t Talk About Bruno” out of my head,” tweets @_RebeccaParham.

The memes have been pretty great, too. Like this depiction of Lin-Manuel Miranda writing the song...

Or digital impressions of the Madrigal family while singing it...

But don’t take anyone else’s word for it. Listen for yourself!

We do not apologize for helping this song burrow even deeper into your brain.