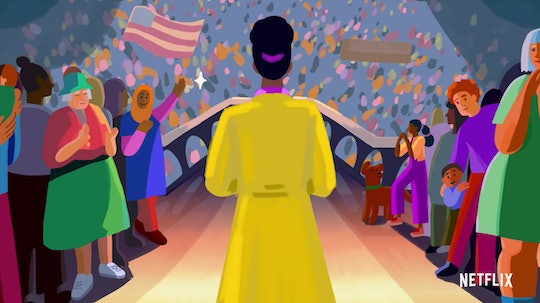 The Obamas Are Behind A New Netflix Show To Teach Kids About U.S. Civics

Barack and Michelle Obama have teamed up with a talented group of musicians to make U.S. civics fun in a new animated series.

Former President Barack Obama and former First Lady Michelle Obama are teaming up with Netflix to help make learning about U.S. civics a bit more fun. Produced by the Obamas, and jam-packed with a slew of incredibly talented artists, We The People is an upcoming animated musical series designed to not just teach kids about government, but get them excited about their civic obligations.

Created by Doc McStuffins writer Chris Nee, We The People was billed by Netflix as “an exuberant call to action for everyone to rethink civics as a living, breathing thing and to reframe their understanding of what government and citizenship mean in a modern world” in a recently released press release. Nee will join the Obamas as an executive producer for the series. Black-ish creator Kenya Barris and Higher Ground Production’s Priya Swaminathan and Tonia Davis will also serve as executive producers.

How To Stream It

We The People will be available to stream exclusively on Netflix, meaning those who don’t currently have a subscription might want to look into getting one ASAP. A basic Netflix plan starts at $8.99 a month.

Get A Sneak Peek

Netflix gave viewers an early look at We The People Wednesday when it dropped a trailer for the series on YouTube — and what a peek it was. Based on the trailer, We The People looks like a fun and educational tour through U.S. civics. The series appears to be full of colorful animation, diverse and inclusive characters, and a number of catchy songs that are sure to have listeners tapping their feet.

Since Netflix has listed the upcoming series under its Kid’s TV, Kid’s Music, and Education For Kids genres, it seems safe to say that yes, We The People will be appropriate for kids. In fact, the series may be just what parents need to start talking to children about important civic duties like voting or paying taxes.

What You Can Expect?

In short? An educational experience centered around whole lot of really amazing music.

According to People, the series will be comprised of 10 different music videos, each of which tackles a different civics lesson in a way that is engaging and age appropriate. For example, in one video, director Victoria Vincent will team up with rapper Cordae to tackle the ins and outs of taxes. In another, Lin-Manuel Miranda, Brittany Howard, David Diggs, Kristen Anderson-Lopez and Robert Lopez will work with director Benjy Brooke to educate viewers on the system of checks and balances outlined in the U.S. Constitution.

We The People will premiere on Netflix July 4, just in time for your family’s Fourth of July celebration.