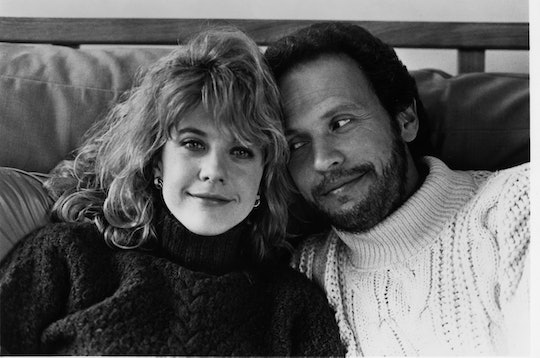 When Harry Met Sally Is Coming To Netflix, But Save It For After The Kids Go To Bed

We all remember the “diner scene,” right?

Rom-com fans it’s time to grab your popcorn, salt and butter on the side! (But only if it’s real butter, not margarine. If there’s only margarine, then nothing, except the popcorn with salt on it, please.) One of the greatest romantic comedies of all time, When Harry Met Sally, is coming to Netflix. But should you invite your kids to share the popcorn? Is When Harry Met Sally appropriate for kids? Or, rather, at what age can you show them this classic? Here’s what you may have forgotten about the film and what you need to know before you make a decision.

Sex is one of the main themes of When Harry Met Sally.

The premise of the film is largely centered around how sex affects relationships between men and women. It begins with new college graduates Sally Albright and Harry Burns taking a road trip together from Chicago. The acquaintances are together as a matter of convenience: he’s starting a career in New York City and, wouldn’t you know it, his girlfriend’s friend is beginning journalism school there. The two find themselves having debates that devolve into bickering: Harry says that men and women can never truly be friends because “the sex part gets in the way” and they eventually part on sour terms.

The two continue to meet up every five years or so just by coincidence — on a flight, at a book store — and eventually strike up a friendship... which, you guessed it, turns to attraction. (They attempt to abet their own feelings for one another by setting up their best friends.) Even so, it seems, their connection cannot be denied.

Of course there’s “the diner scene.”

Even if you’ve never seen this movie, you know the famous “diner scene.” It’s been parodied and referenced so often that it’s become part of our pop culture pantheon right alongside “Houston, we have a problem,” and “I’m gonna make him an offer he can’t refuse.”

But just in case you’ve spent the past 33 years under a rock or on Mars, the scene happens fairly early in the film when Sally and Harry are having a meal (and an argument) in a dinner. Sally assures Harry that, as a man, he wouldn’t be able to tell the difference between a woman’s real and faked orgasm, and she does this by demonstrating her best, loudest “orgasm.”

The scene is capped off by an older woman (played by Estelle Reiner, director Rob Reiner’s mother) responds, “I’ll have what she’s having.”

It’s a classic... but certainly not “family friendly.”

The movie has been hailed as one of the best examples of the romantic comedy genre.

When Harry Met Sally was an instant success. Despite its limited opening weekend, just 40 theaters, it grossed over $1 million dollars, which is is a feat for a small opening second only to Star Wars. When it opened to a national audience in July 1989, it outperformed several summer blockbusters, including Indiana Jones and the Last Crusade, and Batman, eventually earning $92.8 million. Since then, it has been feted with inclusions on countless lists of “Best Romantic Comedies Of All Time,” often landing in the #1 spot.

Our verdict: Probably not a great pick for kids.

Especially little kids. Not only is the film rated R but Common Sense Media recommends waiting until kids are 15 or 16. The salty language and cinematic cornucopia of sexual references probably aren’t appropriate (though, admittedly, it’s not sexually explicit: all the sex scenes are more implied than shown, and there’s no nudity). Moreover, we can’t imagine kids younger than that would be particularly riveted by a movie that’s all about the ins and outs of late 20th century dating.

How to watch? You have several options.

In addition to buying the movie on Blu-Ray or DVD, or borrowing it from your local library (yes, they loan DVDs, and probably have way more than you’d think), you can stream When Harry Met Sally on HBO Max and Netflix (beginning May 1, 2022 ) with a subscription, for free on Roku (with commercials), or rent it on Amazon Prime.