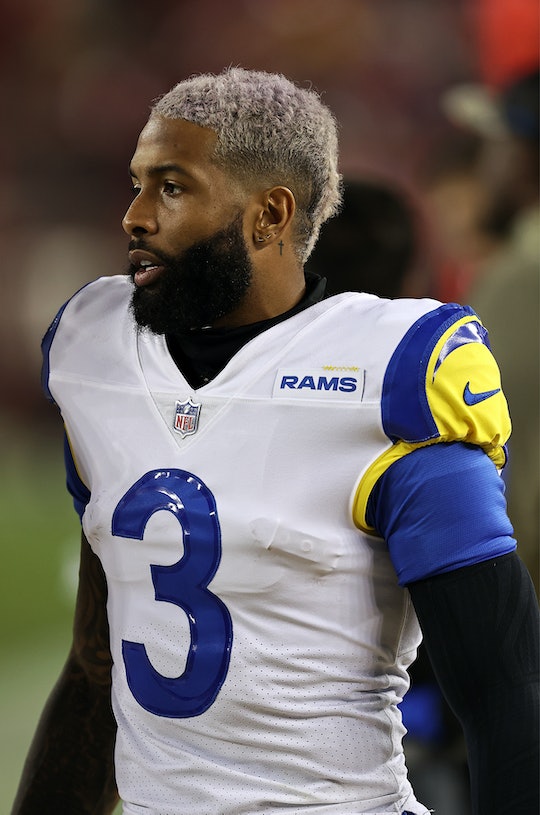 Super Bowl LVI is upon us and, across the country, fans are gearing up to see who will win “the big game” between the Los Angeles Rams and the Cincinnati Bengals. For Rams wide receiver Odell Beckham Jr, still a relative newcomer to the team, this will be his first Super Bowl. Here’s what you need to know about the larger than life player.

Beckham was born into an athletic family in Louisiana

Beckham was born November 5, 1992 in Baton Rouge and is the oldest of three children. His parents, Odell Beckham Sr. and Heather Van Norman, met at Louisiana State University where dad was a football player and mom was a track star who was training for the Olympic trials when she found out she was pregnant. Beckham would follow in his father’s footsteps and play football at LSU as well. In 2014, he decided to forgo his senior year to play professionally, and was drafted by the New York Giants in the first round.

Weeks into his first season with the Giants, Beckham broke the internet when he caught a 43-yard pass with one hand (two fingers, really!), gingerly hopping backward to score the touchdown. Even if you’re not a football fan, you can see how incredibly impressive the maneuver was, and it was immediately dubbed the “catch of the year.” It is still considered one of the greatest NFL catches of all time.

Beckham continued to play for the Giants until 2018. In 2019 was acquired by the Cleveland Browns in an off-season trade (which was not well received news by Beckham) and played there until November 2021, when he was released from his contract. Days later, he joined the Los Angeles Rams mid-way through the season.

He’s a somewhat divisive figure in the NFL

The number of NFL and franchise records he’s broken are a testament to his talent. More than 15 million followers on Instagram speak to his overall popularity as a public figure. He has been seen hobnobbing with celebrities like LeBron James, David Beckham (no relation, though he was Odell Beckham Jr’s childhood hero), Drake, and Our Lady Beyoncé herself. His professional conduct, however – including punching holes in locker room walls or, worse, rival players – has sometimes landed him in hot water with the press and fans. Still, defenders suggest Beckham’s passion makes the game more interesting, and that his skills justify any bravado he might be accused of.

In a sentiment echoed across the internet, The New Hampshire’s Brett Belden wrote “When Ray Lewis roared like a lion whenever he made a tackle, he was labeled as fiery. Whenever Tom Brady sneaks the ball in for a touchdown and yells and jumps about like a caveman, he is labeled as a leader. People complain that the players act like robots who say the same things over and over again. But when someone like Beckham Jr. acts out, he is a problem... As long as he is backing up his play on the field, I have no problem with his actions on, and off of it.”

In a 2019 GQ feature, Beckham himself said that he felt he was held to a different standard, one he believes is based largely on race. “Race plays into everything, whether we want to believe it or not,” he said. “I remember posting a video of me and Tom Brady, and I hate to even bring him in this, but he’s passionate. He cares — he wouldn’t still be playing if he didn’t care for the game the way that he did today. He throws a cup, he yells at referees, he yells at his coach. It’s because he cares that bad. He wants to win that bad. Now, because he has won six Super Bowls they validate him and say, 'He’s won six Super Bowls.’ I want to win the same way he wants to win.”

Sometime this year, he’ll be playing for Team Dad

In November of 2021, Beckham’s partner, fitness trainer Lauren Wood, whom he’s been with since at least 2019, announced she and Beckham were expecting their first child in an Instagram post. His formal announcement on Instagram wouldn’t follow for a month later, on Christmas. It incorporated a mix of professional photos shared on Wood’s announcement as well as some more personal ones. He wrote “My gift won’t be wrapped under a tree this year but I can’t wait to meet You.” Sources say this contract will be for at least 18 years, but will likely be renewed thereafter. (It’s a football/parenting joke! Get it?!)