The Doc Is In Again 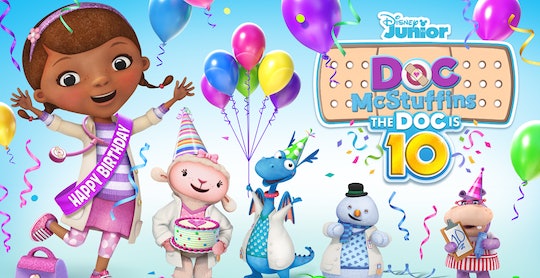 Why Kids and Parents Are Pumped Doc McStuffins Is Back

The beloved preschool classic is back for an anniversary special.

When Doc McStuffins debuted a decade ago, it was unlike any other children’s television show. The Disney series featured a female Black protagonist using STEM skills to help those around her, something no series aimed at preschoolers had done before. And beyond its representational stride forward, the show proved wildly popular with its intended audience, leaving a real void when the final episode aired two years ago.

So it’s welcome news that a brand-new special, Doc McStuffins: The Doc Is 10! is now streaming on Disney+. In a very meta move, the special is all about the titular Doc planning her own tenth birthday party through a series of video calls with real kids with some great ideas for how to celebrate—bounce house, balloons, sleepover, and cake. Each kid shares their own experiences, from designing invitations to dealing with asthma to being afraid of the dark. Doc’s understanding, positive attitude (or is it bedside manner?) while listening to these stories make her a fantastic model for how every parent would want their preschooler to behave.

You’ll find yourself happy that the kids independently decide to throw a surprise party for the Doc because, well, who could deserve it more?

Interspersed throughout the special are short clips from previous episodes that kids will enjoy seeing again and, of course, a reprise of “Wash Your Hands,” the Doc McStuffins song that became a huge hit during the pandemic for obvious reasons.

All in all, it’s a solid balance between a new story and an appreciation of everything that made Doc McStuffins such a beloved, groundbreaking character in the history of children’s television.

The only thing wrong with the new special? There’s only one episode , but the silver lining is that all 136 episodes (and ten animated shorts) are available to stream on Disney+ for your kids’ (re)watching pleasure.

More Like This
'The Proud Family: Louder & Prouder' Is Returning For Season 2 On Disney+
Scott Calvin Is Ready To Retire In The Santa Clauses Series Coming To Disney+
'Squid Game' Is Coming Back For Season 2 On Netflix: Here’s What Parents Need To Know
Here's Where The 'Hocus Pocus' Characters Are 30 Years Later