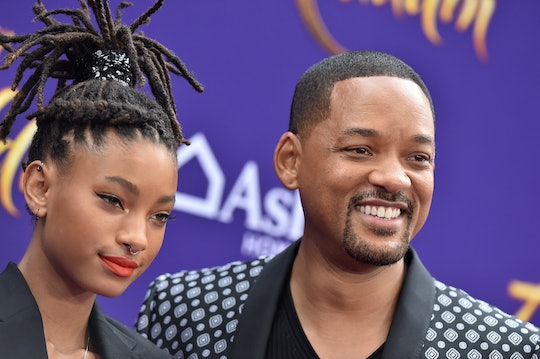 “Willow saved me from what could have been tragic in my life.”

Willow Smith was just 11 or 12 years old when she shocked her parents — and her fans — by spontaneously shaving her head for the first time. But along with being an act of pre-teen rebellion, Will Smith recently revealed Willow shaving her head in the middle of her “Whip My Hair” tour was a “terrifying” wake-up call for him about how he’d approached parenting.

While speaking with Spike Lee during a live event at Kings Theatre in Brooklyn earlier this week, Will spoke candidly about how his children’s own rise to fame had forced him to take a hard look at himself. The King Richard star shares 23-year-old Jaden Smith and 21-year-old Willow with wife Jada Pinkett Smith and has another son, 29-year-old Trey Smith, from a previous marriage.

Both Willow and Jaden began establishing successful careers for themselves in acting and music at young ages. In fact, Willow was just 9 years old when she released her debut single “Whip My Hair” in 2010. The success of the song propelled Willow onto an international tour and it was on this tour that Will said his daughter spurred a major transition in him as a parent.

According to BuzzFeed, Will recounted how Willow was performing in Dublin on that tour when she came off stage and said to him, “Thank you, Daddy. I’m finished.” Will, who’d previously told Lee he’d thought his children’s success was a sign he was doing “really, really well” as a parent, said he reminded Willow of her commitments and told her she had to continue the show, which prompted her to ask, “It doesn’t matter to you that I’m done, Daddy?”

Will said he dismissed the conversation and Willow continued with the tour, BuzzFeed reported. That is, until Willow, then just 11 or 12, came to breakfast a few days later with her head completely shaved.

“I’m looking and I’m like, ‘Got it. I got it, baby. I’m sorry. I apologize. You can stop,’” People reported Will told Lee of realizing he’d been dismissive of his daughter’s emotions. “It was terrifying. I felt like I had been texting, looking at my phone, and stepped out into the street in front of a bus and Willow snatched me back.”

Will credited Willow’s act of rebellion with helping him discover the importance of feelings. “My feelings didn't matter in my childhood home. You did what you were told to do,” People reported Will said. “I had to really think about the question she was asking me. The question she was really asking was ‘Daddy, does it matter to you how I feel?’ It was so explosive in my mind. That was like a deep, existential question.”

“My parenting style changed in that moment,” he continued, adding he went from thinking parenting was about “pushing and prodding and cajoling” his children into the vision he had for them to nourishing and nurturing them. “I started to realize... a seed is already a thing,” BuzzFeed reported Will said. “It's not my job to demand it be a thing that I need it to be to satiate and gratify my ego. “My job is to water and nourish and nurture that seed to become what it already is, and to align myself with that seed versus pushing and prodding.”

In 2018, Willow opened up working to forgive her father for how “harsh” he was during that tour. “It was a couple of years, honestly, trying to regain trust for not feeling like I was being listened to or like no one cared how I felt during that time,” she said.

Speaking to Lee in Brooklyn, Will credited his daughter with helping him pull back from what likely would have been a very damaging parenting style. “That was a major transition for me in my life," People reported he said. “I feel like Willow saved me from what could have been tragic in my life.”